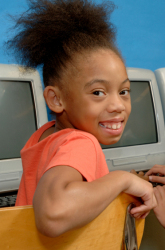 Collect This Article
3.3 based on 6 ratings
by Education.com

It turns out there’s at least one stereotype that’s just plain wrong. Boys aren’t naturally any better than girls at math, and they're not inherently less comfortable with it either. According to the Girl Scout Research Institute, young girls enjoy math just as much as boys. Somewhere along the way, though, their enthusiasm gets quashed. Eighth grade boys are twice as likely as girls to enjoy math, and by adulthood women constitute a mere 22% of engineers and scientists. That’s why second grade, the year of long division, simple fractions, and introductory geometry, is a great time to get kids – male and female - fired up about math.

A 2001 study published in Developmental Psychology showed that fifth and seventh grade girls actually get better grades in math than boys do, but they score worse on the math section of standardized tests. The reason? Researchers speculate that boys have a harder time paying attention in class and tend to be competitive, so they are more easily frustrated by homework. Girls earn brownie points for behaving well in class and study harder, but their confidence falters when they’re sent to an unfamiliar space to take a test.

The main difference seems to be one of confidence. Remember “math is hard” Barbie? Somewhere along the way, young girls learn that math is for men. According to the groundbreaking “How Schools Shortchange Girls” report by the American Association of American Women, girls show a drop in confidence in their mathematical abilities in middle school, and only afterwards show a drop in performance. And although the math gap is closing every year, high level classes are still dominated by boys.

So, what can parents do?

www.GirlsGoTech.org Games and articles to help get girls involved in math, science and technology, sponsored by the Girl Scouts.

Next Article: Adolescent Brain Development
We enable strictly necessary cookies to give you the best possible experience on Education.com.Cookie policy