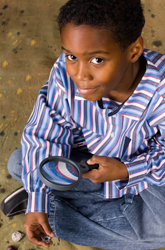 Is your child the next Indiana Stones? Geologists are detectives who use rocks to figure out what forces shaped the earth and how the world will change in years to come. Rock collecting is the perfect way to learn about our planet and the way it works: the movement that placed rocks where you find them, the evolution evident in fossil records, the minerals that are the building blocks of our world. It’s a great hobby; it’s cheap, it’s easy to get started, and kids learn about chemistry, physics and biology while doing what they do best – running around outside and digging in the dirt. There are three types of rocks: igneous (or volcanic) rocks such as obsidian and granite, created when molten magma from below the earth’s surface cools and hardens; sedimentary rocks such as limestone and sandstone, created when bits of other rocks get smushed together over time; and metamorphic rocks like marble or slate, created when igneous or sedimentary rocks are subjected to great heat or pressure, changing the mineral content. We can’t journey back in time or to the center of the earth, but these rocks give us important clues to what’s been happening over the past 4.6 billion years of the earth’s existence, and what’s still going on miles below our feet. The earth’s outer crust is composed of tectonic plates – pieces of crust –which move slowly but constantly over the lower layers. Where two plates collide, the edges are pushed up into mountains. If an opening is created where they collide or where they part, hot molten magma from deep below can be forced out in a volcano. Where stress builds up from the grinding of two plates against each other, earthquakes can result. Want to show your child a small-scale example? Gently crack a hard-boiled egg all over and manipulate the shell without removing it. In some places it will buckle, in others it will part and expose what lies beneath. Then get out of your kitchen! Head out to a quarry or nature preserve to look for some real rock samples. If you’re lucky, you may even find some fossils. Sound like a glorified scavenger hunt? In a way, it is, but what you’re hunting is the answer to the ultimate question: what happened? Why are the rocks you find where they are – were they carried by a moving glacier or deposited by a river? Why have the fossils of oceanic fish been found on mountaintops? Why is there volcanic rock in Massachusetts? The rocks you find are just the tip of the iceberg. This is a hobby that makes kids think. To get started, you’ll need a basic book with color photos of different rock species, good climbing shoes, baggies, a small hammer for prying bits loose and a notebook. Write up each find – where you found it, what you think it is – and bag separately. Then rock on!

Download Article
Next Article: A Parent's Guide: Hey Mom, I Want To Be An Engineer!
We enable strictly necessary cookies to give you the best possible experience on Education.com.Cookie policy