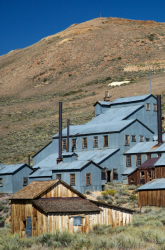 Whether your child’s a history buff or an archeologist-in-training, ghost towns may be just the off-the-beaten-path field trip your family’s been looking for. Despite the name, these towns aren’t filled with goblins and ghouls, they’re simply ghosts of their former selves.

In the popular imagination, ghost towns are creepy Wild West sets in perfect repair, down to the swinging saloon doors. Movies and TV shows feed the flames, with ghost town plots ranging from residents fleeing an evil gunslinger, to a supernatural force that scares everyone away. But in most cases, towns don’t become abandoned for such high-falutin’ reasons.

Blakeley, Alabama, “the South’s loveliest ghost town,” emptied out after yellow fever killed or scattered most of the population. It’s now a stop on the Civil War Discovery Trail and home of Historic Blakeley State Park. Centralia, Pennsylvania, was abandoned by everyone but a handful of hearty souls in 1984, when residents accepted money from the government to move away from the underground coal fire that has been burning in an abandoned mine for over 40 years. Bodie, California, on the other hand, is a classic old west ghost town that sprang up overnight when gold was discovered in 1859, grew to over 10,000 people, and was abandoned when the gold ran out. Now a national historic landmark and home of Bodie State Historic Park, it’s straight out of Hollywood.

The West, with its boom and bust mining towns, brutal agricultural conditions, and towns built for railroads that didn’t always appear, has more than its share of ghost towns. New Mexico boasts Lake Valley (an old silver mining town), Shakespeare (where Billy the Kid washed dishes), and the creepy town of Dawson, site of two huge mining disasters. A quick hike from Yosemite will take you to Bennetville, and Ballarat is just south of Death Valley.

Remember that “time waits for no man”… and no town, either! Some of these towns are managed by the national park system or the Bureau of Land Management, but most haven’t been so lucky. In some cases, nature has taken over, and trees have overrun the streets. In others, the town was abandoned because it was first destroyed by fire or warfare, and there’s not much left to see. This doesn’t mean the towns are not worth visiting; after all, if you wanted stage set perfection, you’d hit a theme park. Go as an explorer, and be aware that disturbing things in any way, especially by taking artifacts, is illegal.

If you do decide to take a trip, read as much as you can about the area before you go to learn what life was like back in its heyday. Most ghost towns are well off the beaten path, so don’t assume you’ll be able to buy anything there. Take a full tank of gas as well as food, water, sunscreen and first aid supplies. And come ready for adventure!