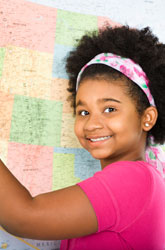 A National Geographic survey found that only 37 percent of Americans, aged 18 to 24, could find Iraq on a map, while just half of these young adults could locate the state of New York! More than 70 percent thought English was the most spoken language in the world (it’s Mandarin). And with only 22 percent with a passport, most hadn’t traveled abroad.

In a global society, where communication with someone in a tiny Internet café in Nepal is instantaneous, geography skills are more imperative than ever. But today, geography entails more than pinpointing countries on a map or learning about the earth’s physical terrain: it encompasses global and cultural awareness, from experience with foreign languages and customs to knowledge of international issues like pollution, natural disasters, and war.

Fernando Reimers, a professor at the Harvard Graduate School of Education, says preparing children to be "globally competent," as well as map-savvy, is crucial. If your child can locate the islands in the Indian Ocean, for instance, she has the background to understand how far-reaching the destruction of the 2004 tsunami was. Michael Lisman, a graduate of  Reimers' International Education Policy Program, calls this 21st-century version of geography "global cultural literacy,” in which a basic historical and cultural context of various parts of the world is as important as map literacy. Just as computer literacy became necessary to live in a changing world, global cultural literacy should now be crucial in today's education, says Lisman.

The program's professors have found that while American children can memorize cities on a map, they may not grasp that these dots are real places where other people live. In an increasingly globalized world, Reimers says, "this lack of interpersonal perspective is problematic as the nation becomes more ethnically diverse" and as the world continues to shrink due to new and faster technologies. They have also found that since more schools have cut courses in geography, foreign languages, and civics, students have trouble relating what they see on a map to their own lives, and how different countries are interconnected.

Consider your child’s exposure to TV, movies, music, books, and video games. Concepts and stories are meaningless if she is not familiar with far-off places or foreign cultures. If she can’t find Los Angeles or Sydney on a map, for example, she won’t be able to visualize the characters’ airplane route over the South Pacific in Lost.

You can help bring geography to life by using the media she's immersed in every day to strengthen her mental map of the world. Here are some ideas for creating a pop culture scavenger hunt. All she needs is an atlas or access to maps online.

Not only will these activities boost your child's global knowledge, but they'll also make the entertainment she consumes more meaningful.