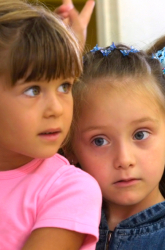 Should you be concerned about the kids your kindergartener chooses to play with? Every parent of a teenager understands the relevance of appropriate friends. But what about young children?

Friendships Among Young Children
We know that young children benefit from the ongoing development of social skills. But what about how young children’s social relations influence their achievement in school?

The results of a 2002 study conducted through UNC-Chapel Hill suggest that, when it comes to learning and motivation, parents of young children should also be concerned about the influence of friends. The study showed that academic achievement and peer social interactions are clearly related, even in first-grade students. Both general popularity and the friendship of similar peers proved to be relevant in the scholastic achievement of these students.

Additional research in recent years has found consistent results. Children’s peers can play an important role in their language and literacy success, even between the ages of 3 and 5. In these years, children become accomplished communicators, developing many of the skills that are precursors to reading and writing.

What Do Young Children’s Friendships Look Like?
A healthy friendship between two young children is one in which both children are respectful to each other. Children should speak highly of their friends and talk excitedly about things they do together at school. Children engaged in healthy friendships should have positive, funny, or silly stories to report about their friends.

An unhealthy friendship, on the other hand, is one that causes a child to be unhappy. Children engaged in unhealthy friendships might be angry at or jealous of their friends and might pick up inappropriate behaviors such as using aggression to get what they want or calling people names.

A Parent’s Role
But what can parents do when their child becomes friends with a peer who isn’t a positive influence? Dr. Susan Assouline, Associate Director of the Belin-Blank Center at the University of Iowa, says that parents play an important role in helping their children form friendships. “This role is important because children need to know that their parents can help to establish parameters. If parents are concerned about an acquaintance that their child has, they should try to help their child form new friendships.”

The good news is that moms and dads can be influential in building their children’s social circle. A few play dates with another child from class can go a long way toward changing a child’s friendships. Assouline says, “Often times, children know something isn’t quite ‘right,’ but they don’t know how to ‘get out of the situation.’That’s where parents come in.”

It shouldn’t be a surprise that the benefits of positive social relations in young children include academic achievement. It's well documented that students who have strong social skills and solid friendships have higher self-esteem than their peers who do not. And, as might be expected, high self-esteem is critical to learning success.

Dr. Elizabeth Knight, Associate Professor of Psychology at Auburn University, says, “There are some groups of children who have problems interacting with other children. Unfortunately, this can lead these children to have problems with self-esteem, depression, and anxiety, all of which can lead to learning problems in school.”

Tips for Parents
The key is for parents to intercede before their children become too involved with peers who have less-than-positive influences on their behavior. Arranging play dates with other children is just one way parents can be proactive. Parents should also:

Next Article: When You're Worried About Your Kid's Kindergarten Teacher
We enable strictly necessary cookies to give you the best possible experience on Education.com.Cookie policy