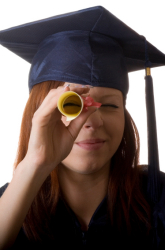 This month millions of students will take that famous walk to the stage to receive their high school diplomas. According to new statistics, an increasing number of them are going the extra mile to get them.

Download Article
A 2005 study of student transcripts from 640 public high schools around the country showed that students are earning about three more credits than their counterparts in the 1990s. That breaks down to about 360 more hours of instruction throughout their high school careers.
The extra coursework hasn’t tripped grads up, either. The overall grade point average for students in 2005 was slightly higher than GPAs in the 1990s. The racial gap in high school academics is also (ever so slowly) closing: the study found more African-American students completing demanding academic programs. Girls still reign supreme: every year of the study, the GPAs of female students ranked higher than those of male students.
The overall increase in grade point average may have to do with a higher number of students enrolling in Advanced Placement programs, which are weighted higher than regular classes. The AP program, created more than 50 years ago, features college-level courses in order to prepare students for higher education.
A separate study showed that about 24 percent of graduates in 2006 participated in at least one AP program, up from 16 percent in 2000. Not only that, but more of them are passing the AP exam--a hallmark of the program.
Though drop-out rates are still daunting, at least there appears to be greater success for those who do stay in school. Pomp and circumstance indeed.
Next Article: Preparing for College: Cool Ideas for Summer (for teens)
We enable strictly necessary cookies to give you the best possible experience on Education.com.Cookie policy