Log in with different email
For more assistance contact customer service
School and Academics
Helping Your Child with Writing
Grammar 101: A Quick Guide 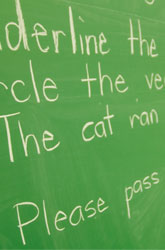 Adults and kids alike battle those pesky marks called punctuation, and that struggle is even more important in an era of text messaging and Twitter tweets. "Don't for a minute believe that the Internet has revolutionized writing to the point where anything goes," says Becky Burckmyer, author of Awesome Grammar. In a world where your child texts a whole conversation on a cell phone screen, or your teen types an email using lowercase letters only (and no periods), a refresher course on the finer points of grammar – such as verb and preposition use, the elusive apostrophe, and capitalization – is helpful.

If your teen is rusty with rules, consider re-introducing some of the following elements. Just don't do it all at once. Look over one of her latest essays, choose one or two mistakes to focus on, help her to recognize why they are errors, and offer pointers, like the ones below. After she understands the difference between lie versus lay, for instance, she can move on to the next task: your and you're.

To get you started, Burckmyer offers tips on the most common grammar gaffes:

“Your Going to You’re Room!”

This is wrong, wrong, wrong. Your is a pronoun – the possessive form of you, referring to something that belongs to a person: your textbook, or your sweatshirt. You’re, however, is a contraction of you are – the apostrophe signals that two words have been combined. The heading above should read, “You’re going to your room!”

The stinker: the past tense of lie is lay. Annoying, isn’t it? It may help to memorize the tenses:

“Over There! They’re Coming in Their Rescue Ship!”

Yes, this is a tricky trio of homonyms. If you know what each word means, you’ll have a better idea of how to use them:

Their: belonging to them (“their iPods”)

There: in that place (“the gym is over there”); also used in “there is” and “there are” (“there are snowflakes in the sky”)

They’re: a contraction of they are (“they’re moving to Denver”)

The Stickiness of Its and It’s

Possessive pronouns – including yours, his, hers, and theirs – never have an apostrophe in them. Its and whose are also part of this list. The apostrophe indicates a contraction: it is (or it has) and who is (or who has).

If you’re in doubt as to whether you should write its or it’s, try to substitute belonging to it, it is, or it has, says Burckmyer. Consider this sentence:

The playful puggle jumped out of its/it’s cage.

Test it out: The cage belonging to it. It is cage. Which phrase makes sense? The first. We know, then, the dog jumped out of its cage.

Verbs: Where the Action Is

Passive: A rock was thrown by Dale into the river.

Active: Dale threw a rock into the river.

Adjectives and Adverbs: Pump Up Your Prose

Adverbs, often ending in –ly, describe how, where, why, and to what degree: Ann accepted the gift thankfully. Graham read the book immediately. But Burckmyer warns of possible blunders:

No: Silly or brilliant, I thought we needed to try his suggestion.

Yes: I thought we needed to try his suggestion, silly or brilliant.

Mark only shoots hoops on Sundays. (Meaning: Mark throws around a basketball all day on Sundays.)

Mark shoots hoops on Sundays only. (Meaning: Sunday is the only day Mark plays basketball, but he likely does other activities that day, too.)

Conjunctions and Prepositions: The Glue of a Sentence

Some are just two letters long, but conjunctions and prepositions are vital to a sentence. Common conjunctions are and, but, so, though, for, or, which, yet, and although. See how they join two sentences, preceded by commas:

A run-on, a frequent mistake in student writing, results from not using a conjunction when it’s needed:

No: I flew east for the Inauguration, it was incredible.

Insert and after the comma to connect the two independent sentences, or combine them by replacing it with which:

Yes: I flew east for the Inauguration, and it was incredible.

Also Yes: I flew east for the Inauguration, which was incredible.

No: Whom did I see this morning who died in the newspaper? (Is it possible for a person to die within pages of newsprint?)

Yes: Whose obituary did I see in the newspaper this morning?

Correct (but awkward): My daughter has nothing of which to be ashamed.

Informal (but better): My daughter has nothing to be ashamed of.

Style at a Glance

Writers use guides, like the Chicago Manual of Style, to brush up on the “laws” of language. Here’s a cheat sheet with tips from Burckmyer:

Capitalization: Capitalize (and italicize) titles such as books, movies, and TV shows. Don’t “cap” a word because its abbreviation is capped (SUV, but sport utility vehicle). Cap a person’s full name, but lowercase terms like mother or uncle.

Apostrophe: Don’t tack an apostrophe to the end of an abbreviation or family name to create a plural!

Collective nouns: Beware of nouns that include numbers of persons or are viewed as units, such as staff: “The staff opposes the principal’s announcement.” The use of media is disputable. Some sources say it’s always plural; others have embraced it as singular: “The media is biased.”

Numbers: Write out numbers one to nine, but use numerals for 10 and up: “My nine-year-old sister has 12 hamsters.” Follow this rule for ordinals, too: “He was the sixth guest to meet the 44th president.”

Wordiness: Use to instead of in order to, or because in place of the reason why is because. Burckmyer’s list of redundant phrases includes advance planning, cooperate together, general overview, and new innovation.

21st-Century Terms: Avoid words that suggest a single sex (firefighter, not fireman; resources, not manpower). Capitalize Internet and Web. Use quotation marks sparingly, especially for terms adopted into our lexicon, or vocabulary: green, social network, and text (as a verb) are now familiar expressions and don’t need to be inside quotes.