The High Price of Smelling Good 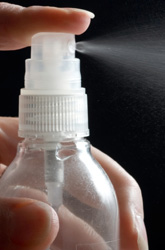 Could the very things that are keeping your kids clean be making them sick? A new University of Washington study found that some of the top-selling laundry products and air fresheners emit hazardous chemicals. But none of these hazardous chemicals show up on labels, making consumer detection impossible.

The leader of the study is Anne Steinemann, a professor of civil and environmental engineering and public affairs at the University of Washington. She says three air fresheners, including a solid deodorizer disk, a liquid spray and a plug-in oil, and three laundry products, including a dryer sheet, fabric softener, and a detergent, were isolated at room temperature. The surrounding air was then analyzed for small molecules evaporating from the product's surface.

Nearly 100 volatile organic compounds were emitting from these six products, Steinemann says, including acetone (the active ingredient in paint thinner and nail polish remover) and chloromethane, which has been banned for use in refrigerators for its toxicity. Five of the six products emitted one or more carcinogenic air pollutants, such as 1,4-dioxane--considered by the Environmental Protection Agency to have no safe exposure level. "I'm highly concerned. These fragrance products contain chemicals known to be toxic or hazardous," she says.

Even more worrying, says Steinemann, is that there are present in these products a host of other ingredients that may not contain hazardous chemicals, but can generate hazardous materials when in contact with the ozone. "Even if a product does not contain formaldyhyde, it can still create formaldyhyde," she says.

What are the effects of all these chemicals? National surveys published by Steinemann in 2004 and 2005 showed that about 20 percent of the population reported adverse health affects from air fresheners, such as headaches and breathing difficulty. Laundry products vented to the outdoors affected about 10 percent of the population with symptoms such as headaches, dizziness, asthma, seizures, loss of consciousness, and skin irritation. But, even those who may not be experiencing symptoms may be in harms way, Steinemann says. "We don't always know when chemicals are affecting us. They could be causing injury to one or more body systems without us knowing it," she says.

How do the companies that make these products get away with it? Well, for one, they're not technically doing anything wrong; manufacturers are not required to list their ingredients on the label. "There is no law that requires that a fragrance disclose its ingredients even though it contains hundreds of chemicals," she says. But, Steinemann says, there should be. "It affects everybody - these are some of those most widely used products out there. Even if we don't use them, our neighbors use them, and they are used in hospitals, airplanes, businesses and other public places."

Steinemann is not listing the names of the products that she studied, in part because these companies are not in a category by themselves. In another study of 25 products, some of them claiming to be "organic" and "green", Steinemann found similar types of hazardous chemicals. "I did not test a single fragranced product that did not give off toxic chemicals. I don't want to give people the self-assurance that if they don't buy brand A, but buy brand B instead because it wasn't one of the ones mentioned, that they'll be okay," she says. "These represented a general class of products."

What can parents do to avoid these products? Steinemann says people should buy unscented or fragrance-free laundry products and ditch the air fresheners entirely. "They don't clean your house, all they do is add chemicals to the existing air," she says. Worried your house will start smelling like a locker room? Steinemann suggests using some old-fashioned methods for keeping your house smelling sweet:

Steinemann says currently there is no legislation in the works to mandate better disclosure on product packaging, but there is one very powerful way to enact change: consumer demand.