Log in with different email
For more assistance contact customer service
Parenting and Families
Family Entertainment
Has Your High Schooler 'Got Game'?

Has Your High Schooler 'Got Game'? 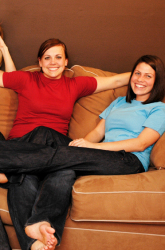 You may have noticed that since your child entered high school, it's a little harder to get her interested in family game night. As your teenager's mental capabilities and attention span near adulthood, you may have to exchange the old pee-wee board games for something more challenging and exciting. Here's a list of new and classic games to keep your teen's mind (and social life!) in top shape:

This fast-paced game requires both creative vocabulary and critical thinking skills. Players must build as many words as possible out of nine randomly selected letters. They they pair their words with synonyms (words with the same meaning), antonyms (words with opposite meanings) and homonyms (words that sound alike). And all against the clock! Players can then challenge their competitors' word pairs—is poultry really the opposite of beef? This game introduces teens to the art of debate and the joy of finding the perfect word. Thinking quickly under pressure, and mastering antonyms, synonyms and homonyms is also useful SAT practice. Is your teen up for the challenge? * * * * * (Karmel Games, $26.97)

The classic game of categories is sure to beef up your teenager's brainstorming abilities. In each round, players must think up a word to fit into the 12 categories given—from common groupings like "vegetables" or "state capitals", to more unusual categories like "things that you hide". The trick is that all items have to start with the same letter (i.e. carrots, Columbus, credit card info). Each round is different, giving this game serious staying power. Scattergories draws on your teen's vocabulary skills and encourages him to use words he may not have used before. It also encourages individuality and creativity by rewarding those who come up with a word no one else wrote down. It's best to keep a dictionary handy, though, for those “loosly based” answers up for debate! * * * * * (Hasbro, $22.99)

Where in Hades can one go to get out of the sun? Answer: Shade. In this word game, players race to solve clues like this one and advance their pieces. The first player to reach the center of the board wins. An added twist to the game allows players to make their own anagrams by rolling a letter die on every turn. Once they've collected enough letters to make a word, they can advance to the center of the board for a chance to win. Different levels of clue packs can be purchased separately, so the game increases in difficulty along with your budding word detective. The timed component of this game creates a competitive atmosphere, so while interaction between players is limited, words become your teen's best friend. This game builds critical thinking and vocabulary skills and also offers a healthy dose of spelling practice—spell check not included! * * * * (Karmel Games, $29.97)

This bluffing game is a recipe for laughter. Players earn points by guessing or bluffing answers to weird questions with unbelievable, but true answers. What is the definition of sialogogue? If you guessed “anything that creates the flow of saliva” you win a point and advance your piece on the game board. You can also advance if you successfully bluff other players into thinking your answer is correct. The educational component of the game lies in writing imaginative and authoritative definitions to fool, charm or stump the crowd. Players also learn to “read” their opponents' body language and distinguish their writing style. The fun component comes when the answers are read out loud. It just goes to show that sometimes truth is stranger than fiction. * * * * (Mattel, $22.99)

Set (Ages 6 and up, for one or more players)

This game of visual perception was created by geneticist Marsha Jean Falco in 1974. Similar to a geneticist connecting the traits of animals and plants to the genes and chromosomes in their cells, players must sequence cards based on similarities and differences. The object of the game is to identify "sets" of three cards from 12 cards laid out on a table. Each card is unique in its four features: number (1,2, or 3); symbol (diamond, squiggle, or oval); shading (solid, striped, or open); and color (red, green, or purple). A "set" consists of three cards where each feature is either the same on all of the cards, or different on all of the cards. Players call out “Set” as soon as they see them, infusing the game with an exciting and challenging time element. The game promotes problem solving and deductive reasoning skills, in addition to bringing home the concept of probability. * * * * (Set Enterprises, $12.00)

(Ages 10 and up, 4 or more players) In this word game, players use strategy and bluffing skills to outwit their opponents. Players are handed a card which no one else can see. Two people will wind up with a word card, while everyone else gets a ???, or bluff card. Each player gives a word clue and the goal is to guess which two players have the “linq” or the word clue. While the words won't exactly be new vocabulary, creating unique ways to describe words like “trade” or “compact” is great practice in communication skills. The bluffing portion of the game also requires emotional intelligence to “read” body language. This is a fun game for a teen's night in with family or friends. * * * (Endless Games, $19.99)

EqualZ (Ages 10 and up, 2-6 players) Here's an educational spin on a typical card game. Instead of jacks, queens and aces, this pack has number cards (0-9), operator cards (addition, subtraction, multiplication and division) and reversible parentheses cards. In each round, players try to make as many arithmetic expressions as they can to equal a randomly selected target number. An optional rule allows players to buy and sell cards in an effort to use up all the cards in their hand and win the game. EqualZ practices both mental math and creative problem solving skills, and makes for a great break from SAT practice sets! * * * (Karmel Games, $14.97)
Next Article: Creating Family Rituals
We enable strictly necessary cookies to give you the best possible experience on Education.com.Cookie policy