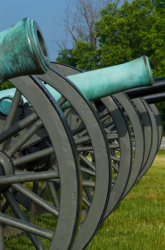 Kerpow! Bang! Boom! If you’re raising a boy, the odds are you’re used to the sounds of battle. Yet more often the not, boys will tell you that Civil War history is “boring.” Sure it is, if you’re reading a dull textbook or listening to a less-than-inspired teacher drone on about events that took place in an impossibly distant past. Sometimes all it takes is a visit to an actual battlefield – boy nirvana – to bring history to life.

The most famous battle of the Civil War ended with over 50,000 casualties and marked a turning point in the War. Over four months later, President Abraham Lincoln delivered the Gettysburg Address at the newly christened Soldiers’ National Cemetery, reminding the Union that they fought not only to win, but for freedom. Today, the site is owned by the National Park Service, which provides guided tours and a museum stocked with artifacts about soldiers’ lives. Children will enjoy seeing the games soldiers played to pass the time between skirmishes: chess, cards, and dominoes. Kids can earn “Junior Ranger” status by participating in various educational opportunities. “The part that was really exciting was the ranger program for kids where they can pretend to enlist in the army and learn what it was like to be a soldier in the Civil War,” says Orna Lo, who brought sons Alex and Michael. “For months after we returned home, they loved reenacting the marching and the battle that they learned about in the program.”

Shiloh was the first big battle of the Civil War, with more casualties in two days than America had faced in the Revolution, the War of 1812, and the Mexican War combined. Historian Shelby Foote, who wrote the novel Shiloh, described this as the best-preserved Civil War battlefield in the country. You won’t find busloads of camera-toting tourists here, just acres of land looking much as it did during the War. Take the driving tour, stopping at sites like Bloody Pond, marvel at the heartbreakingly small uniforms in the museum, or participate in the Junior Ranger Program. Better yet, visit during one of the many reenactments so your kids can watch a “real” battle unfold.

Antietam was the deadliest daylong battle in American history, with over 23,000 casualties (including six generals) in 12 hours of fighting. Five days later, Lincoln issued the Emancipation Proclamation. Two weeks later, he visited the Pry House, now a Field Hospital Museum where you can see a recreation of an operating theater. Of course, you’ll probably spend more time at the “Kids’ Corner” in the museum store, which carries everything from toy cannons to reproduction bullets, soldiers’ belt buckles, and Civil War currency.

There’s no shortage of Civil War battlefields and forts to visit. The Civil War Discovery Trail lists historic sites in 32 states from Maine to California. To find a spot near you, visit: www.civilwardiscoverytrail.org and watch your bored boy become a history buff before your very eyes.