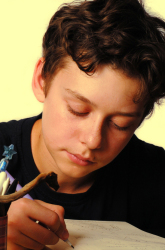 About the second week of fourth grade, my son Jeff greeted me by proclaiming, “I can never learn my times tables! Never!” But as frustrating as this can be for a child, it may be more so for his concerned parents.

As both an educator and a parent, I can tell you that teaching is much easier than parenting. So don't sell yourself short. If your child is in a homework rut, frustrated with the concepts he's trying to learn, and convinced he'll never master his times tables, or memorize his history facts, it may be time to intervene.

Here are some tried and true pointers for parents:

These approaches are a great way to empower children to acquire and retain information. But more importantly, the techniques help stimulate a child's imagination to try new approaches to learning.

Next Article: Graph it up! Statistics for the Younger Set
We enable strictly necessary cookies to give you the best possible experience on Education.com.Cookie policy