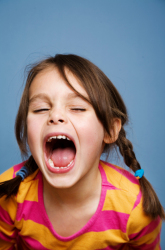 When children are young, their ability to cope with internal and external pressures is limited. Kids under the age of four have difficulty expressing emotions, which can rise like plumes from a volcano, blasting out at the very parents who are there to teach, love, and guide them. Some children are more prone to these red-faced outbursts than others, but even the most even-tempered little kid can have an occasional meltdown.

"Almost all kids have tantrums at one time or another," says Tina Feigal, M.S. Ed., founder of the Center for the Challenging Child, in Minneapolis, Minnesota, "Eighteen months to four years is the most common age range.The trigger is usually an adult saying 'no' to a deeply felt desire, and the resulting tantrum is an expression of profound loss," Feigal says.

Without a doubt, a tantrum is no fun for a parent. In fact, it can be downright exasperating. But despite the outrageous displays of stomping feet and flailing arms, screaming and wailing, the bulk of tantrums aren’t attempts to manipulate, or ploys for attention. Most tantrums have much more mundane origins—hunger, an inability to communicate, or just plain old exhaustion.

The best way to stop a tantrum is to understand your child’s triggers and run interference ahead of time. When you see the fire rising in your child, act quickly. A little intervention goes a long way. Here are five ways to cool the heat:

Though your child's tantrums may seem like a force of nature - inevitable, inhuman, and horribly destructive - he or she is still only a child. Finding ways to head-off the storm before it hits won't only benefit you - it will bring relief to your child as well.