How a 1st Grader Thinks 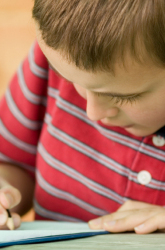 Your rambunctious first grader is always curious and asking questions, but how much actually gets through? Here's what experts have to say on the topic.

Jean Piaget the psychologist credited with forming the theory of cognitive development in the late 1920s, created a list of mental limitations for each age. Here's what he said first graders were capable of comprehending:

So, what are first graders capable of learning? For this question, we turn to psychologist Benjamin Bloom. In the 1950s, he led a team of researchers to create a cognitive learning guide about the process of understanding information. Each level is based on the one in front of it, similar to a staircase. Use the Piaget information to get a sense of what your child is capable of comprehending. Then take a look at Bloom's levels of learning to help you guide your child towards the next level of understanding. Bloom's levels of learning are:

By giving your child a new concept that's not beyond the mental limitations laid out by Piaget, you can watch him progress through Bloom's levels of learning. Want to give his learning a boost? Recognize where he is in the Bloom levels, then ask him a question that requires evaluation, such as asking him to judge whether learning addition is useful. This helps a child move from the rules of addition, towards thinking about how it can be used, and deciding if it's important.