How a Kinder Thinks 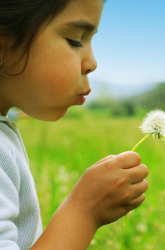 Kindergarten, the first big step in your child's education career. Your child might be a little nervous, and you might be too! One way to fight those nerves is to understand your child's mental development, so you'll know not to sweat if there's an idea he just doesn't understand yet.

So, what are kindergarteners capable of understanding? Jean Piaget the psychologist credited with forming the theory of cognitive development in the late 1920s, created a list which is a great place to start to look for that answer. In a nutshell, Piaget discovered that all children pass through four stages of development, one after the other, in the same order. To be capable of learning certain things, they have to be physically ready. Here's what Piaget had to say about kindergarteners:

So, what are kindergarteners capable of learning? For this question, we turn to psychologist Benjamin Bloom. In the 1950s, he led a team of researchers to create a cognitive learning guide, which shows at what stage children can understand various concepts. Each level is based on the one in front of it, similar to a staircase. The levels of learning are:

Level 1: Knowledge. The child has already been taught a concept and just needs to remember it. For example, after he learns about measuring time he can repeat that a week has seven days.

Level 2: Comprehension. The child understands what the concept means. She can tell you in her own words why keeping track of time through weeks is important.

Level 3: Application. The child can come up with examples of how the concept can be used. He realizes that when he marks seven days off a calendar, a week has passed.

Level 4: Analysis. The child can break down each idea and think of it in ways that weren't introduced. At this level your child can figure out what something does. She now understands that she can count down weeks until her birthday.

Level 5: Synthesis. The child can apply the concept to new situations. For example, he may start counting down weeks because he knows he has to return a library book in three weeks.

Level 6: Evaluation. The child judges what she's been taught and thinks over the ramifications. For example, weighs the pros and cons of a seven day week and decides if it's an appropriate amount for a unit of time or if she wished it were more or less.

By giving your kindergartener a new concept that's not beyond his mental limitations, you can watch him progress through the levels of learning. You can help him progress faster by asking a question that requires evaluation, such as how he'd feel if a week was eight days. For example, would he like to add a day on to his school week, or get another day off at the weekend? Which does he think is more likely and why? These sorts of questions encourage a kindergartener to think about time in a more challenging way, and to incorporate everything he remembers about time in order to make a judgment.

Most kindergarteners will be comfortable in the areas of knowledge, comprehension, and application, but just beginning to incorporate levels 4-6. That's perfectly normal. All of the guidelines in the world are only that... guidelines. Each child develops at her own perfect pace. So keep the expectations in mind but take them with a grain of salt. With your help, your kid will get there.

Next Article: Intellectual Development
We enable strictly necessary cookies to give you the best possible experience on Education.com.Cookie policy