Log in with different email
For more assistance contact customer service
Outside the Classroom
Educational Programs and Movies
From Script to Screen: How to Read Movies

From Script to Screen: How to Read Movies 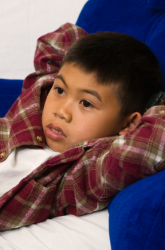 Readers are eager, yet sometimes hesitant, to watch their favorite literary universe unfold on screen. The experience of watching a film adapted from literature is a strange one: because we expect or hope to see the world we imagined in our heads, we can be sorely disappointed or wondrously inspired. But whether it’s Katherine Paterson’s coming-of-age fantasy Bridge to Terabithia, the upcoming The Golden Compass — the first in Philip Pullman’s His Dark Materials series — or one of the Harry Potter films, it’s hard not to compare these Hollywood versions to the books we’ve read and loved.

However, by encouraging your child to look beyond the movie curtain, she'll begin to notice how movies are scripted, photographed, and edited to differ from the book version. By understanding the process behind movie-making, she'll realize that not even the biggest blockbuster can tell a story as well as her own imagination. Studying the subtleties between books and films can lead to lively and fruitful discussions with your child. For example, try watching the fifth installment of J.K. Rowling’s saga, Harry Potter and the Order of the Phoenix. Then, ask questions to distinguish the differences between what was read and watched, and begin to investigate the reasons behind them. Here are some questions to get started:

Do the book and the film begin the same way? How do both openings catch your attention?

What new characters are introduced? Do they physically look the way you imagine them when you read the book?

Do Harry, Hermione, Ron, and other recurring characters look the same? Are they becoming more developed characters? Have they changed, or are their desires and needs the same?

Does the set design of various locations — the Hogwarts school, London, or the Ministry of Magic, for example — match what you pictured in the book?

Do some scenes or action sequences go on longer in the book than the movie? What passages in the book aren’t given enough screen time, or are forgotten? Why?

Do you notice dialogue in the film that is different from conversations in the book? Why would dialogue be altered, shortened, or lengthened?

What is the overall mood of the book? Light and whimsical? Eerie and frightening? Does the film evoke a similar mood? Is Harry’s adventure more of a physical, mental, or emotional one?

Does the book end the same way the movie closes?

The exercise teaches kids to watch movies with a critical eye, and they’ll have fun comparing the book to the movie. Plus, they’ll learn to use literary and film lingo, like “scene,” “setting,” and “mood” - all important concepts for future study. And, with the help of their healthy imaginations, kids will get to picture what it's like to direct the big-budget blockbuster of their dreams!

Try it this activity with other films adapted from children’s literature, including:

Next Article: The New Wave of Young Nonfiction
We enable strictly necessary cookies to give you the best possible experience on Education.com.Cookie policy