How to Talk to Your 2nd Grader 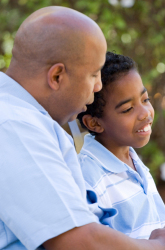 “I think you're selfish.”

Comments like these are delivered by children, to children. They represent their best effort, under stress, to communicate with a sibling or friend. It's hard for a second grader to realize that these sorts of phrases only escalate the conflict.

When you hear this kind of nonproductive communication, use it as an opportunity to teach your kids some problem solving skills.

Instead of wagging your finger, turn to your child and ask, “What did you really want to tell her?” This asks the child uttering the put-down to stop and think. It forces her to become conscious and challenges her to get in touch with what it is she really wants.

Many children are not tuned in to the fact that they have some level of responsibility for getting what they want. They take the stance that the other person is responsible and choose name-calling in an attempt to change their sibling or friend. They give up their power by concentrating on the half of the interaction over which they have the least control.

When children are guided to discover and articulate their wants (“I don't like it when you put your foot on the rung of my chair”), they reclaim their personal power. They do so by choosing to focus on the responsibility they have to determine what happens.

When children name-call, they give others a built-in excuse to get angry in return. The issue then becomes the name-calling itself, rather than the precipitating behavior.

Asking your children the question, "What did you really want to tell her?” reminds them of what they want and helps them to reassess the best way to get it. Here's a list of other phrases that communicate the same message:

Help your child focus on her own role in her interactions with others. It's a lesson in responsibility that she'll carry with her into adulthood, when articulating wants really starts to count.

Chick Moorman is the author of "Parent Talk: How To Talk To Your Child In Language That Builds Self-Esteem and Encourages Responsibility" and the co-author of "The 10 Commitments: Parenting with Purpose."