Log in with different email
For more assistance contact customer service
Outside the Classroom
Internet Safety and Your Child
Identity Theft: Is Your Child at Risk? 5 Things You Need to Know

Identity Theft: Is Your Child at Risk? 5 Things You Need to Know 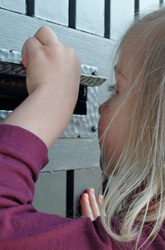 As you get ready to send your children off to school, you’ve got a lot on your mind. But did you know that in addition to worrying about healthy school lunches, soccer schedules, and back to school supplies, you should be thinking about protecting your child’s identity?

Many parents don't realize just how vulnerable their children are to identity theft. According to the Federal Trade Commission (FTC), as many as 400,000 children may already be victims of identity theft. To make matters worse, the number of complaints has increased by 78 percent over the past several years, making children the fastest growing segment of identity theft victims.

Children and teenagers are prime targets for identity thieves for a number of reasons. They typically have clean credit reports, making it easy for scammers to take out loans in their names. They are also more likely than any other age group to post personally identifying information on social networking sites, such as MySpace and Facebook, which are often targeted by fraudsters looking for personal information. And because most children don’t use their Social Security numbers until they’re old enough to apply for a job or loan, identity theft could go undetected for years.

Fortunately, by arming your children with knowledge and common sense, you can help protect their children’s identity. The following tips will drastically reduce your child’s risk of identity theft:

Because child identity theft is becoming more common, it is important that parents take precautionary measures to prevent this crime or at least catch it before it does too much damage. If you are proactive when it comes to protecting your child’s identity, it is much less likely that they will have to experience the trauma and inconvenience of identity theft.

Next Article: Internet Safety Facts
We enable strictly necessary cookies to give you the best possible experience on Education.com.Cookie policy