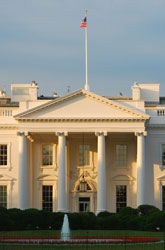 This week will mark one of the most important events in history—America gets a new president. It’s only happened 43 times since the country’s beginning, and Barack Obama makes 44.

You can share in the excitement with your child, and turn the presidential inauguration into a learning moment your child will never forget.

To start, challenge your child to write a message to Obama about the changes she would like to see in the world, or encourage her to keep a journal which imagines what living in the White House might be like.

In the mood to celebrate? You don’t have to just watch the inauguration balls (all ten of them) on television, you can throw a political party of your own!

Teachers agree, the inauguration is a great opportunity to take the lessons being taught in your child's civics textbook and bring them to life, while teaching your child what it means to be a good citizen.

If you're eager to get your older child involved in civic education, there's no better time than now. Obama’s inauguration is all the media rage--the subject of social networking forums, comedy shows, and even fashion lines! You can leverage this hype to get your teen excited about the political process.

And with every presidential election come new senators, congressman, town officals, and school board members. All those new politicians will need to hear from their constituents—of every age—regarding the issues that matter to them. That’s why inauguration season makes for a great time to encourage your child to write a letter to her local representative.

Now that the transfer of power is official, parents and educators around the country are wondering what the change in administration will mean for their schools. Find out more about the new President's education plans here: Obama on College Funding, Obama on No Child Left Behind, Obama on School Choice, Obama on Math, Science and Tech Eduation, and Obama on Teacher Recruitment and Retention.