Log in with different email
For more assistance contact customer service
School and Academics
Helping Your Child with Reading Comprehension
Instant Message Novels: The Prose of the Future?

Instant Message Novels: The Prose of the Future? 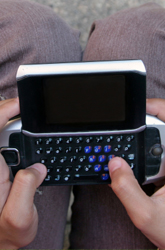 Susan Blackmore, author of The Meme Machine, says today’s brain -- your child's in particular -- is shaped by memes. Memes are units or streams of information constantly competing for our attention, moving through a culture by popping up or flashing on websites, TV commercials, or video clips, for instance. Your child, whether in seventh or 11th grade, can relate to the characters in ttyl because their digital conversations – interactive streams of chitchat fit for a short attention span – are similar to the correspondence with her own friends.

A story retold through IMs or text messages illustrates the daily life of your youngster, which probably includes gossip, crushes, catty friendships, and social online networks. “It’s the right way to tell certain stories in particular,” says Cynthia Leitich Smith, an author and professor in the Writing for Children and Young Adults Program at the Vermont College of Fine Arts.

There’s an artistic judgment at work, says Smith, as well as an understanding that digital communication can be used as a literary technique for a new generation. “An IM novel is a modern interpretation of the epistolary,” a novel written as a series of letters, diaries, newspaper clippings, and other documents. These popular 18th century novels, often about amorous affairs, were told through the exchange of letters between lovers; more complex tales dealt with adventure and intrigue: letters were delivered to the wrong hands, some were faked, and others were hidden from characters.

Instant message novels reflect the way of thinking of future readers, writers, and thinkers. “Integrating new technologies into youth literature is both a storytelling device and a way of doing what art always does, which is reflecting reality,” says Smith. “Young adult authors can’t ignore technological developments in communication when plotting or framing stories any more than our predecessors could ignore the invention of the telegraph or telephone.”

In ttyl – short for “talk to you later” – best friends Maddie, Angela, and Zoe discover that 10th grade is a rocky year, full of obstacles like boys, a difficult math class, and a flirty teacher. Although riddled with emoticons, web lingo (“brb” for “be right back”), and spelling that may drive you crazy (“ur” for “your”), the IM exchanges reveal feelings of the characters – ones of camaraderie, honesty, and rejection – that are identifiable to your child. “It’s fair to consider how personalities can be ‘louder’ on screen than in person,” says Smith. “For a shy teen that is active online, the IM or email format may be a way of showing such a personality type as an active, page-turning character.”

But can a book written entirely in instant messages be considered prose? Could this format, instead, be a negative influence on budding writers and readers? As with any literary device, there are limitations. An IM novel lacks traditional story components: an omniscient narrator who provides exposition and setting or scene description, quiet passages of time, or internal monologues. Developing characters or deep themes may also be more difficult – if characters converse online to each other, page after page, the opportunities for self-reflection and musings are absent.

“The reader is missing the connective tissue in an instant message novel,” says Smith. Experimental and lyrical novels, on the other hand, work on a poetic level as a series of interrelated pieces. “In contrast, the novel is a far less forgiving form of character, plot, or logic inconsistencies,” says Smith. But while an instant message novel may not be appropriate to teach reading and fundamental story elements like plot, setting, or exposition in a middle school classroom, the format mimics the day-to-day interaction between your child and her pals.

In the end, your child and her generation is tied to this mode of communication. “Readers, regardless of generation, tend to be adverse to gray pages,” says Smith. “IM novels are popular because they’re still a novelty, they speak the language of the audience, and they allow the reader a chance to fill in the blanks for themselves.”

Granted, your child may read “ttfn” for “ta ta for now” or “omg” for “oh my god,” but when a young reader fills in the blanks – imagines a scene, understands subtext, reads between the lines, or infers back-story or future plot events based on what she reads – she is thinking critically about the text. In a culture where many kids stare at a TV screen instead of flipping through a book, this type of interaction with the written word is positive.

Next Article: Reading Comprehension — Reading for Meaning
We enable strictly necessary cookies to give you the best possible experience on Education.com.Cookie policy