400 Years of History at Jamestown 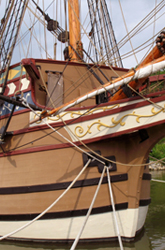 Happy birthday, dear Jamestown, happy birthday to you … what’s that? You haven’t heard of Jamestown? Jamestown, Virginia often gets overshadowed by its glitzier neighbor, Williamsburg, but it’s no less important to American history. After all, Jamestown was the first permanent English settlement on American soil, and the first seat of English government. The first African Americans landed here as indentured servants, and it was at Jamestown that Pocahontas became American legend.

A little rusty on your history? Here's a refresher: Settlers from the Virginia Company landed at Jamestown on May 14, 1607. Under siege from the Algonquian Indians, they immediately built a fort, but beset by warfare, famine and disease, their future looked grim. Captain John Smith left, and only 60 of 214 settlers survived the hard winter of 1609. With an influx of new supplies and new settlers, the colony revived, and went on to enjoy a short period of peace when Pocahontas, the daughter of local Indian Chief Powhatan, married Englishman John Rolfe. Under continuing attack and with poor management, the King revoked its charter and Williamsburg eventually became the capital of Virginia.

For several hundred years, Jamestown was largely forgotten. Until now. Archeologists began excavating the original site in 1994, expecting to find that the fort had washed into the river and disappeared. Instead, they’ve turned up a treasure trove of 150,000 objects as well as the original walls of the old fort. Excavation continues from April – October, and the lab is open year round. Run jointly by the National Park Service and the APVA Preservation Virginia, the site includes original 17th century buildings, costumed glassblowers and a museum store.

Right next door is the Jamestown settlement, a living history museum complete with galleries, replicas of the three boats that landed here, and exhibits on the three cultures that converged here: English, African, and Powhatan. Tour a recreated Powhatan village, explore the life-size replica of the original fort, and browse the Riverfront Discovery Area.

Jamestown is a major history lesson waiting to happen, with a little archeology thrown in for good measure. It makes a great family trip, so pencil it onto your calendar.

Next Article: Game On! Educational Picks for Middle Schoolers
We enable strictly necessary cookies to give you the best possible experience on Education.com.Cookie policy