Log in with different email
For more assistance contact customer service
Kindergarten
Kindergarten Routines and Schedules...And Why They Matter

Kindergarten Routines and Schedules...And Why They Matter 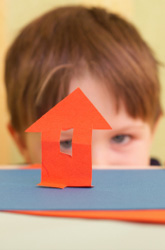 Circle Time. Readalouds. Walking in line. These routines, and many others, may not show up on state standards, but get ready: they are bread and butter on a typical kindergarten class menu. And like it or not, your child will need to figure out how to handle them.

Want to help? It’s probably not practical for you to invite the neighborhood for daily afternoon “circle time” practice, and you can expect a swift mutiny if you try to force siblings to line up each time you go out. But you can still use household routines to bring enormous benefits to your child, both now and for years to come, says Jane Nelson, Ed.D.

Over nearly 40 years, Nelsen, author of the legendary Positive Discipline series, has worked with parents and teachers on effective discipline methods in schools and at home. Kids thrive, she explains, on routines that make sense to them and in turn help them make sense of the world. There’s just one key element that can’t be left out: “Instead of telling, telling, telling,” she says, “we really believe in getting kids involved.”

So let’s say, like many new kindergarten kids, your child is not so thrilled about bedtime. Knowing that big days await her at school, you think it would be nice to take a warm bath, cozy up with a book, and drift off to sleep…but somehow you find yourself doing that old standby, Yell and Scream Parenting, to no avail. As your voice grows louder and louder, your child grows more and more belligerent.

Not to worry, says Nelson, this is totally normal. The typical kindergartener is just starting to revel in all he can do, whether it's dressing himself, or spreading his own peanut butter on a piece of toast. It's natural for him to want to test the family boundaries when it comes to independence. Laying down the law doesn't work quite as well once a kid hits kindergarten, as it may have when he was in preschool. That's why making children feel involved in the process is key.

According to Nelson, this is a prime teaching moment! Here are three ways to jump-start a plan that makes your kid feel like he's having a say, while still ensuring that schedules stay on track:

Start by making a plan...together. “The root of the word ‘education,’” says Nelsen, “is ‘educare’—to draw forth. One of the biggest mistakes parents and teachers make is to ‘stuff in.’” Instead, she says, sit down at a calm moment, talk through the evening routine, and help your child make a list. Ask questions about anything your child forgets: “What about brushing your teeth? What about choosing your clothes for the next morning?” If your child can write, that’s great—but if not, don’t hesitate to take dictation. What’s important is that your child is helping to create a clear, manageable list—in order.

Get visual. Help your child make a personal chart. You’ve probably seen store-bought “sticker charts” for chores. Stay away, urges Nelsen; such external reward systems “only create approval junkies, or rebellion, or manipulation…kids need to feel empowered and included!” Instead, she says, use a camera—digital works well—to take a picture of your child doing every stage of the routine, from brushing teeth, to sleeping. Then, says Nelsen, cut out the photos and have the child help paste them onto a sequenced chart.

Let the chart be the boss. Next time you find your kid jumping on the bed instead of climbing into it, or playing in the living room instead of getting dressed for school, ask her what’s next on the routine chart. All you need to do is point. “It’s just so fabulous,” says Nelsen, “when you help children believe that they are capable, that they can do things, and things can make sense.”

Of course, says Nelsen, you can expect some rough bumps now and then. In particular, you’ll want to make sure you’ve trained kids well for every task on the chart. Demonstrate each of the tasks first, doing them alongside a child several times, and then allow your child to do a task independently, while you watch. Kindergarten teachers use the same method at school for every routine, from sitting in a circle to washing hands.

You can use personal charts at home at any point in the day. With careful training, says Nelsen, kids can help prepare meals, clean the house, make their own lunches—and learn, along the way, that everything they do can be a valuable contribution.

It all comes down to this: power to the little people! The more they feel a part of things, the more you'll get their cooperation. Don't be surprised when bedtime and morning gets a whole lot easier, once your kid knows what to expect. With so much positive success, why bother misbehaving?