Log in with different email
For more assistance contact customer service
School and Academics
What to Expect in Kindergarten
Math: What Happens in the Early Months of Kindergarten?

Math: What Happens in the Early Months of Kindergarten? 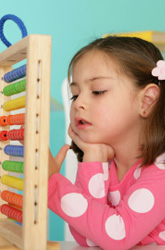 Do you get a kick out of hearing your child’s version of counting? “1, 2, 3, 4, 5, 6, 6, 8, 9, 10, 13, 14, 17, 20!” Well enjoy those moments, because they themselves are numbered! Math takes a leap forward in kindergarten and at its core, math is the study of numbers. In order for your child to tackle what's coming, she must first know how to count. When most parents think about what happens in kindergarten, they think about reading. But there is another side to that coin: what happens in math. While every classroom is different, there are a set of math skills most kindergarten teachers cover, and a set order in which they're taught. The early months of kindergarten are typically centered around counting and recognizing numbers. Then, once counting is in place, kindergarteners move on to skills that have a lot of utility in their lives: patterning, shape recognition, and time. It's important to stay on top of the skills that are being taught in the Fall and early winter months, so that you can reinforce them at home with fun hands-on math activities or kindergarten math games. But if you're curious what's likely to happen during the first few months of school, here's a quick rundown of the key math skills most kindergarten teachers focus on before Christmas break: 1. Reciting, Recognizing, and Writing Numbers: Ask your child’s teacher for the exact expectations for counting in kindergarten. Depending on the state and school standards, kindergarteners may be expected to count and recognize numbers up to 20 by December. By the end of the year, many school expect kids to count to 50, or 100. In most cases, September through December is dedicated to numbers one through ten or one through twelve. Kids practice counting accurately, recognizing the numbers when they are out of order, and even writing the numbers correctly. 2. Understanding What Numbers Represent: Your kindergartener may know how to count already, but does he understand that each number represents an amount? Kindergarten students spend a lot of time working on this concept in the beginning of the year. 3. One-to-One Correspondence: One-to-one correspondence is the ability to correlate a number to an object. If you gave your child a small handful of marbles and asked her to count them, would she move one marble out of the pile as she said each number? To adults it may seem like an innate concept, but it isn’t! Kids have to learn how to correlate one object to one number. 4. Shapes: Circles and squares and triangles, oh my! Your kindergartener will be perfecting his shape recognition skills in the first months of school. Down the road a bit, he’ll learn about three-dimensional shapes like spheres, cones, and cubes. 5. Positional Words: Before jumping into patterns, most kindergarten students learn about positional words such as up, down, and sideways. Knowing these terms is not only good for your child’s mathematic success, but also for his general descriptive vocabulary. Weave these words into your everyday conversations so that by Winter, your little one will be right on track. 6. Patterns: Your child will practice copying and continuing existing patterns, as well as creating new ones on her own. Students learn to make patterns by color, shape, size, and position. Look for patterning skills to be reviewed consistently throughout the school year in art, whether it's beaded windchimes or colored pasta masterpieces. The good news? Kindergarten students usually find pattern practice extremely fun. 7. Equal Sets/ More and Less: Once your child has counting perfected, he can begin comparing two sets of objects. This usually begins with kids sorting like and unlike objects into groups. Then kindergarteners learn to figure out which set has more, and which has less. Students also learn what it means to have equal sets. 8. Graphing: A great way for kindergarten students to get a sense of how to compare sets is by graphing. Teachers typically introduce simple bar graphs in kindergarten. To make the lesson stick, they involve kids in the process whenever possible. The teacher may ask each child in the class to report how he or she got to school, for example, and then make a graph out of the results. Or she may ask all the students to compare the size of their pumpkins at Halloween, then make a graph of how many are small, how many are medium, and how many are big. 9. Ordinal Numbers: If there is one thing that kindergarten students do a lot of, it’s lining up! Most kids already know very well what first means, but kindergarten math requires that students know second, third and fourth, too! Ordinal numbers will not only be used for lining up, but also as a means for describing sets. For example, a student may learn that the first coin is smaller than the third coin.
10. Beginning Time Skills: Later in the school year, your kindergartener will begin learning to tell time to the nearest hour. For now, teachers focus on building your child’s sense of time. Working with the calendar is a daily activity, and you can expect your child to learn the days of the week fairly quickly through songs and rhymes. Words like yesterday, today, and tomorrow will also be discussed. In these Fall and early winter months, math is fairly straightforward and fun for kindergarten students. Because kids use these skills everyday in their non-academic lives, there's plenty of opportunity for a natural reinforcement of the concepts at home. Make counting and recognizing numbers your first priority for this chunk of your kindergartener’s year. Break out that video camera, and ask your cutie to count as high as he can for you now, while it’s still innocently imperfect. In June, the improvement will be worth a home video sequel!

Download Article
More math resources can be found on our website.
Next Article: Sugar and Spice: Why Rhyme Is So Nice
We enable strictly necessary cookies to give you the best possible experience on Education.com.Cookie policy