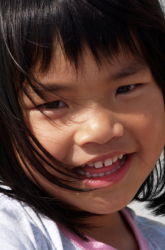 Does your kindergartener still struggle to pronounce certain sounds? Although your first reaction might be to worry about speech delays or impediments, difficulty with a few sounds in kindergarten is still normal. “A general guideline when looking at speech is how much you understand what a child says,” says Simalee Smith-Stubblefield, Associate Professor of Speech-Language Pathology at University of the Pacific. So how much of what your child says can be understood, and how will you know when to worry?

While it's perfectly normal if there's still a sound left to master - so long as family and strangers can understand your child -  the more different sounds he struggles with, the more reason to worry. Of the "Late Eight Developing Sounds,” so-called because they are commonly known to develop later in childhood, struggling with four or more can be a warning sign. “Most of these sounds should be developed by kindergarten," says Smith-Stubblefield, "but having problems with a maximum of three sounds is normal for the age.”

So what are the Late Eight Developing Sounds? Look out for these tricky kindergarten tongue-twisters:

Don't give up on your child's public speaking career just because of a few speech problems. With hard work, and some giggles, you'll see steady improvement, and some new confidence to boot!

Next Article: Elementary School Speech Delays: What to Look for
We enable strictly necessary cookies to give you the best possible experience on Education.com.Cookie policy