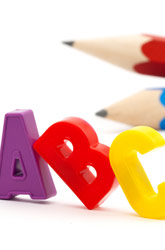 Here we are, fast approaching the end of kindergarten! As you look at your child’s writing, you probably can’t believe that a mere seven or eight months ago she was only writing her name. Now your child is reading two or more sentences, and when I mean really reading it! Your child has begun a major leap into the written world. And April through June is where kindergarteners really solidify everything they have been practicing all year long.

The basic elements of kindergartener's writing look the same at the end of the year as they do in spring, but there is more meat on the bone! Here’s what you might want to look for as the year wraps up.

Drawings still play a part of your child’s writing, but they are beginning to take on a more subtle role. By the end of kindergarten your child’s illustrations should be vivid and chock full of details, which then translates into a story with real setting and characters.

Sounding Out the Middle

Students at this point in the year will be expected to have a good command of phonetic knowledge and be able to use it independently. That means your child’s ability to hear more phonemes or sounds in words should be improved. By this time in the year you'll also see a lot more vowels in her words, which up until now probably had been more difficult for her to isolate. In December she may have written the word sister, str. Now, she should be able to hear the vowel and spell it sistr. And easy sight words like cat should now be evident in her writing as well.

At this point, your child should have a good command of the sight words expected for kindergarten and be able to call upon them when needed in his writing. Most kindergarten classrooms will have a list of 20 or more words. So if your kindergartener is having trouble with all the words on the list, this is the time to intensify the effort.

Writing to a Prompt

For much of the kindergarten year, writing takes place in children's journals where they are able to write on the topic of their choice, such as an experience they have had in or out of school. However, many school districts will require that exiting kindergarteners write to a specific topic. This is a little more difficult than being asked to write about your drawing or something you did that day. Instead they might be asked to write about a time when they felt excited or what they like to do at the park.

Subject and a Verb

While at times it might look like grammar is not the focus in kindergarten, the most basic elements are indeed being taught. So what does that mean for your child? It means, simply put, that they should write in complete and coherent sentences. They will be learning that a sentence is one thought or idea. And that thought should start with a capital letter and end in a period, or maybe even a question mark.

So what does a typical kindergarten piece of writing look like in late spring? It might go something like this: I like to go to the prk wif my frend. We like to play on the slid. I have fun at the prk! Some kindergarten students will be able to write enough to fill a page while others will just get out two or three sentences. Don’t fret: it’s not quantity, but quality that counts at this point. What’s important is that he’s writing in complete sentences with a mixture of sight words and phonetic spelling.

Learning to read and write, like all developmental milestones, happens at different rates for different kids. If your child is struggling in writing there are a few things you can do to give him a boost:

Your kindergartener has been working hard all year to get to this point, and while writing at the end of the kindergarten year is impressive, it will be your job to keep it going throughout the summer. Make sure your child is writing at least five times a week. Keep a summer journal and make it part of her daily routine. Now that your child has almost finished the first year of school, celebrate the huge achievements she has made this year! First grade is just around the corner, and it holds a whole new set of goals and expectations!

Next Article: Plan a Party for Preschool Graduation!
We enable strictly necessary cookies to give you the best possible experience on Education.com.Cookie policy