Log in with different email
For more assistance contact customer service
School and Academics
Helping Your Child With Social Studies/History
Learn About History with Your Small Change!

Learn About History with Your Small Change! 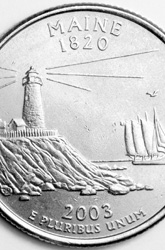 Did you hear the news? Coin collecting isn’t just a quirky habit anymore. It’s a fun way to teach your child about American history. This year, the United States Mint releases the final state quarter in its 50 State Quarters Program—a ten-year endeavor to emboss a unique, iconic image of each state in the Union on a total of 32,356,000,000 quarters. From New York’s Statue of Liberty to Alabama’s Helen Keller to Colorado’s Rocky Mountains, your wallet is a rich pile of history just waiting to be told. That’s why Jim Noles wrote A Pocketful of History: Four Hundred Years of America—One State Quarter at a Time. The book outlines the story behind each state quarter design, unraveling the broad history of the United States.

Here are excerpts from 5 of those stories to get you and your child started on an exciting voyage through history, via your change purse:

You’ve heard about the Nina, Pinta and Santa Maria—the ships that brought Columbus to the New World—but what about the Discovery, Susan Constant, and Godspeed? They deserve similar respect, but they will have to settle for being featured on the reverse of Virginia’s state quarter.

That coin honors them for delivering the first colonists to Jamestown, a colonial settlement whose quadricentennial Virginia celebrated in 2007. That group of colonists, including a mason, several laborers, carpenters, bricklayers, a fisherman, a pair of surgeons, a preacher, a barber, and Captain John Smith left London on December 20th, 1606. Five months later, they reached Virginia.

Although Jamestown was destined to become the first successful English settlement in North America, such success seemed far from certain, due to Indian attacks, disease, starvation, and fire. Despite such troubles, tobacco offered some hope of the quick riches that had eluded the earlier gold-seeking colonists. In 1614, John Rolfe exported Virginia’s first shipment of tobacco in four barrels. Tobacco exports quickly climbed to nearly 50,000 pounds within four years. Stoked by such hopes, Jamestown grew to be home to 1,240 settlers in 1622, and remained the capital of colonial Virginia for another fifty-five years.

This state honors its official bird, the Brown Pelican, and a symbol of its jazz heritage, the trumpet, on its coin. Eighteenth-century naturalist and artist John James Audubon called the Brown Pelican one of the most interesting of the American birds. With a wing-span of up to seven feet, this bird can fly for many hours at a time, and catches fish by diving head first from high in the air. The resulting impact would kill ordinary birds. Pelicans, however, are equipped with air sacs just beneath their skin that cushion the otherwise punishing blow.

The choice to depict the pelican is reflective of the state’s plight to save the bird from extinction. The widespread use of pesticides such as DDT and endrin to kill insect pests ended up killing many pelicans. The chemicals found their way into the food chain, inexorably working their way up it, and contaminated the fish ingested by the brown pelican. Those fish, in turn, contaminated the pelicans themselves. By the mid-1960s, the population of pelicans in Texas and Louisiana had shrunk from some 5,000 birds to scarcely 100 pelicans fighting for survival along the Texas coast. The pelican was put on the list of endangered species and in 1972, the U.S. Environmental Protection Agency banned the use of DDT, and restricted the use, handling, and disposal of pesticides such as endrin.

The Louisiana Department of Wildlife and Fisheries worked to restore nesting population s, and by 1985 the bird was no longer endangered outside of Texas and Louisiana. Restoration work continued in Louisiana, and in 1990 the state surveyed approximately 1,333 nests. By 2007, there were 3,600 nesting pairs identified on Raccoon Island alone.

The year was 1635. In the spring, the Angel Gabriel had embarked from Bristol, England for the New World carrying 100 passengers. On the afternoon of August 14, the Angel Gabriel, battling increasing winds and a stiffening breeze, anchored off the Maine coast and began unloading passengers. Nightfall not only interrupted the unloading, but cloaked the arrival of a catastrophic hurricane, one of the worst in New England’s recorded history.

By the wee morning hours of the following day, the storm surge was running as high as twenty feet. The boiling surf and raging winds pushed the hapless galleon in John Bay, where it was slashed apart by the bay’s treacherous shoals and split open beneath Pemaquid Point’s granite cliffs. Fortunately, with many of the ship’s party already ashore, the disaster only claimed the lives of one sailor, between two and four settlers, and most of the cattle and cargo. In return, it left a stern reminder of the perils of navigation along Maine’s rocky coast .In 1826, Congress appointed $4,000 to construct a lighthouse at Pemaquid Point. The first lighthouse, completed shortly thereafter, soon crumbled—a demise caused, some suspect, by its builder's use of saltwater in his lime mortar.

Learning from its earlier mistake, the government’s subsequent contract specified that only fresh water be used, and by 1835, the thirty-eight-foot stone tower was in place, an edifice that still stands today. Because of its setting on a rock ledge, the lighthouse actually rises nearly eighty feet above the surf, and because of its fourth-order Fresnel lens, it can be spotted from fourteen nautical miles out to sea. Pemaquid Point and its lighthouse remain one of the most visited and photographed tourist spots in Maine. As such, it has a prized place on the back of Maine’s state quarter, along with the schooner Victory Chimes, which today remains the largest American flagged pure sailing vessel still in operation.

This state’s coin depicts Meriwether Lewis and William Clark’s historic return to St. Louis down the Missouri River. The genesis of the Lewis and Clark expedition lay in the late summer of 1802, when President Thomas Jefferson read of the Scots trader Alexander MacKenzie’s journey from Alberta, Canada, across the Rocky Mountains to the Pacific Coast. Spurred by Great Britain’s challenge for the Pacific Northwest, Jefferson decided to mount an American expedition overland to the Pacific. To head the expedition, Jefferson had to look no further than his trusted personal secretary and fellow Virginian, Captain Meriwether Lewis of the U.S. Army. To help him lead the expedition, Lewis tabbed William Clark, a hardy army veteran, skilled at watercraft, mapmaking, and perhaps most important, leading soldiers.

The expedition departed from St. Louis in May of 1804. For the rest of that spring and summer, they edged their way up the Missouri River, skirting modern-day Iowa and Nebraska and finally crossing in to the Dakotas. They waited out the winter in the realm of the Mandan Indians, near the site of the present-day Bismarck, North Dakota. In April of 1805, Lewis and Clark resumed their journey.  In early September, pressing up through the Bitterroot Mountains, the expedition encountered its first snowfall of the season as it crested the Continental Divide. It was a punishing march that brought it into the land of the Nez Perce and, finally, to the Clearwater River.

They followed the Clearwater to the Columbia River, which in turn led them to its estuary on the Pacific. In all, according to Clark’s calculations, he and his companions had rowed, sailed, rode, marched, and climbed 4,121 miles to reach that point. On the way back, the expedition split at the Great Divide to explore the Marias and Yellowstone rivers. By late summer, they rejoined one another and on September 22, 1806, paddled the last few miles to St. Louis. At St. Louis, the town’s 1,000 residents thronged the riverbank to see the return of the buckskin-clad adventurers. The Corps of Discovery, by beginning and ending in Missouri—the future Show Me State—had just shown America how to reach the Pacific.

The last coin in the project, and the last state to join the Union, is also the only state to depict a Native American (or Native Hawaiian, to be precise) on its coin. For its part, Hawaii elected to impose an image of King Kamehameha I alongside a map of the islands.

According to legend, Kamehameha was born on the “big island” of Hawaii at the time when Halley’s comet swept past the earth in 1758. As the comet’s journey left a trail of light across the Pacific night sky, the island’s kahunas prophesied that a child would be born who would be the “slayer of kings.” Suitable alarmed, King Alapai ordered the baby killed. Alapai, however, was too late—the worried parents spirited their baby son away, hid him in a cave, and arranged for him to be raised in secret. When the child grew into manhood he took the name Kamehameha, meaning “the very lonely one” or “the one set apart.” Alapai eventually learned that Kamehameha survived and invited him to join him in the royal court.

Later, when local district chiefs revolted against the current rulers, they found a ready ear in Kamehameha. After years of battles and conflicts Kamehameha was left in control of the island of Hawaii. By force of arms, he was able to gain control of all the islands. Kamehameha succeeded in establishing a line of kings and queens that managed to preserve the islands’ independence for nearly a century until the United States annexed them in 1898.

Want to know more? Get all fifty in A Pocketful of History.

Next Article: Geocaching: A High-Tech Treasure Hunt
We enable strictly necessary cookies to give you the best possible experience on Education.com.Cookie policy