Learning About the National Anthem 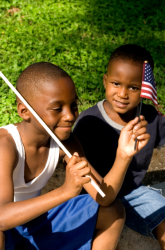 Your children sing it at baseball games and school concerts. You probably did the same at their age. But how much do you really know about our national anthem?

Francis Scott Key was a 35-year-old lawyer when he wrote “The Star Spangled Banner” in 1814. The War of 1812 was in full swing, and the British had taken his friend William Beanes, a doctor, captive. Key and an American agent put up a white flag and sailed a small boat to the British flagship stationed outside Fort McHenry in Baltimore. The Admiral agreed to release Beanes, but made all three Americans anchor there overnight. From their perch on the water, Key watched the fierce battle rage, unable to tell who was winning. In the morning, when the smoke had cleared, he watched an American flag emerge, and jotted down the first words of “The Defense of Fort McHenry” on the back of an envelope. Set to the tune of an old drinking song, “The Defense of Fort McHenry” became “The Star Spangled Banner.” It officially became our national anthem in 1931.

What does all this mean? Basically, a national anthem is a song representing national pride and love of country. So, as a show of respect, teach your kids that all goofing off, whispering, giggling, and rough-housing stops when the music starts. Hats come off and are held in the right hand; the right hand is held over the heart, and everybody stands and faces the flag (if there is one) or the music.

No, you can’t visit a song, but you can see the original lyrics, Fort McHenry, and the star spangled banner that inspired it all.

If, after all this, your kids still lip-synch the words while waiting impatiently for the game to start, they may need to consider what the lyrics really mean. (For lyrics with music, visit kids.niehs.nih.gov/lyrics/spangle.htm). Ask them to imagine watching “bombs bursting in air,” straining all the while to catch sight of the American flag that would be their only sign the United States had been victorious. Imagine Key’s joy when he realized that “the flag was still there.” He sent a prayer of thanksgiving for his country’s delivery, voicing a fervent hope that “freemen” fighting for their homelands would always be victorious. While it would be many years before every American was truly free, Key’s celebration of American triumph stands as a monument to ideals worth fighting for.