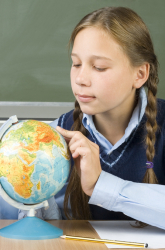 Left-brained or right-brained? No, it’s not a science fiction movie, and no, your child doesn’t actually have two brains. The human brain consists of two hemispheres connected by the corpus callosum, and we all use both spheres. Most of us have a tendency to lean on one more than the other, though, and which side your child relies on the most may influence how he or she learns and performs in school.

Researchers say that left-brained people tend to be logical and analytical, with strong mathematical and verbal skills. Left-brained students are usually able to work well on their own and focus in class, although they may prefer a quiet classroom. Modern schools, with their emphasis on standardized testing, have been accused of catering to left-brained students, since those are the kids who excel at research and memorization.

In contrast, right-brained kids are imaginative and intuitive. Because they see the whole, they tend to recognize patterns and be good at visual-spatial relations. Take a right-brained child and you’ll find an artist, a musician, or a writer – someone extremely creative who may seem disorganized and dreamy to teachers. Although these kids tend to do well in art classes, they may squirm during lectures, spell poorly, and have a hard time working independently. Put them in a group, though, and they’ll shine at working with others.

Having trouble fitting your child into either of these boxes? That’s because both sides of the brain work in tandem, and while we may have tendencies one way or the other, most of us are able to add 2 + 2 and paint a simple picture. We actually need both; while the right hemisphere absorbs whole nuggets of data, only the left hemisphere can break down and organize the information so it makes sense. Nobody is all “left brain” or “right brain.” In fact, some experts consider the whole debate overblown.

“In my opinion, much of the ‘left brain / right brain’ work is not of much value,” says Eric Chudler, Ph.D, a neuroscientist and Director of Education and Outreach at University of Washington Engineered Biomaterials. “For most complex functions, both sides of the brain are important.  Also, it is impossible not to teach both sides of the brain.” So, while your child may be fidgeting and squirming in the “left-brained” classroom, she’s probably still learning.

Still, there’s no harm in rounding out your cerebral son’s education with art projects and collaborative experiments, and your dreamy daughter might benefit from help organizing her notes into outlines that she can study visually with you. Left-brained or right-brained, individual attention helps children thrive.