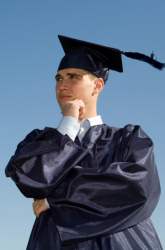 Collect This Article
3.5 based on 2 ratings
by Education.com

Though the notorious No Child Left Behind Act is supposed to guide all public schools, high schools get left by the wayside. That's because of the funding scheme.  "No Child Left Behind was not drafted or written for high school. The dollars don't usually go to high school and they don't really work at the high school level," says Jamie Fasteau, Director of Policy Development for the Alliance for Excellent Education, a Washington nonprofit aimed at improving performance in America's high schools.

Now, the United States Senate and Congress are trying to change that with the Graduation Promise Act. It would provide $2.5 billion to decrease the nation's high school drop-out rate.

It's an important step considering that more than one-third of ninth graders won't graduate in four years, and most of them won't graduate at all. The Act looks to level the playing field by giving much needed funding to schools that are well below standards. How will these standards be determined? By the drop out rate, test scores, and poverty level of the school.

Here's how it'll  work: The Bill lets the Secretary of Education write the checks to each state. Then through the state, local schools who have applied will receive grants based on their needs.

Sounds too good to be true, right? Here's the catch: Though the grants will potentially help at-need kids graduate, the funding will come out of the education side of the budget. That means current education programs may lose money in order to fund the new program.  Several organizations are advocating for new funds in an effort to prevent this from happening.

Though the bill probably won't be passed for another year or longer, Fasteau says that that the act is "gaining support all the time in the House and Senate." In the meantime, Fasteau says, "Parents can really be taking a look at where their children are going next, making sure that they're heading into good schools." She suggests taking a look at your school's drop-out rate and test scores. Though there may be help around the corner for struggling schools, you should investigate what classes your child needs for either higher education or the work force and not expect the cavalry to ride in any time soon.

Many experts agree that turning around the drop-out rate means the nation will have a better prepared work force. For parents who feel strongly about the bill, Fasteau suggests writing to your member of congress. If you're interested, go to: www.congress.org.

Next Article: What's Important in Reading?
We enable strictly necessary cookies to give you the best possible experience on Education.com.Cookie policy