Log in with different email
For more assistance contact customer service
School and Academics
Helping Your Child with Vocabulary
Build Better Vocab: The Lowdown on Linguistics 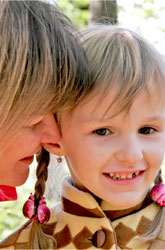 If your child has been introduced to linguistics – the study of language, its structure, and word meanings – she is in the position to excel at vocabulary and become a better reader. “A good vocabulary can be a ticket to a better job, enhanced opportunities, and success with people you care about,” says Becky Burckmyer, author of Awesome Vocabulary.

A word is similar to a person:  it’s unique and has its own origin. The “root” of a word is what it sounds like: its base, or main unit. Think cred in the word incredible, which means “believe,” or port in transport, which means “carry.” Many English words are derived from Latin or Greek. “If you know what a root, a prefix, or a suffix, or all three mean, it’s often easy to figure out the meaning of a word without googling Merrian-Webster online,” says Burckmyer. Take the word bicyclist, she says. If your child knows the prefix bi means “two,” the root cyclo means “circular,” and the suffix ist means “one who does,” she can guess that a bicyclist is someone on two circles, or wheels.

But the English language is tricky, and your child will stumble upon terms notorious for fooling people, like confusing homonyms, or words that sound exactly alike, but have distinct meanings. “Some words mean something quite different from what, by their looks, their sound, or the way other people are using them, they ought to mean,” says Burckmyer. Younger readers may not know the difference between except from accept, for instance.

Bottom line? Encourage your child to read all the time, everywhere. “Read the newspaper, read the classics. Read online, hard copy, billboards. Read on the subway, on the plane, in the tub,” says Burckmyer. It’s the easiest and most natural way to build up her vocabulary.

Next Article: Reading Comprehension — Reading for Meaning
We enable strictly necessary cookies to give you the best possible experience on Education.com.Cookie policy