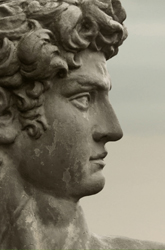 Does your child know that Nike, the global brand adorned by Tiger Woods and Michael Jordan, got its name from a winged goddess of victory? Is she aware the Olympics originated in ancient Greece and were held to honor Zeus, the lightning bolt-bearing god of gods? Or does he know that arachnids received their name from a girl, Arachne, whom Athena – the goddess of wisdom, war, and the arts – transformed into a spider after a weaving contest?

Popular media has, in some form, already introduced your child to the Greek pantheon. Take Hercules, for example, the Disney film about the strongest man who ever lived. (This son of Zeus, however, is the Roman version of the Greek hero Heracles.) Gods and goddesses are resurrected on paper as well, like in Rick Riordan’s Percy Jackson and the Olympians series and Sarah Deming’s Iris, Messenger.

Mythology also seeps into TV shows and video games. Sawyer, Kate, and others stuck on the purgatorial paradise of Lost are modern versions of tragic heroes on odysseys of redemption or vengeance. A video game like Nintendo’s Kid Icarus alludes to Icarus, the son of Daedalus, who plummeted after his wings of wax melted as he flew near the sun.

References are even found in company names from products – think the household cleaner Ajax – to words of the English language. A “narcissist,” for instance, describes a self-centered person, and students may not know the word derives from Narcissus, a man so spellbound by his own beauty that he withered away while staring at his reflection!

The Greeks revered the Twelve Olympians, who lived on Mount Olympus, but descended to earth in various forms to slay monsters and exert their powers. But they looked and behaved like mortals, committing acts of greed, pride, and wrath. “They were worshipped despite their outrageous behavior, and are now recognized by modern culture as representatives of both the good and bad attributes and experiences that make us human,” says Michele Delattre of the ORIAS program at U.C. Berkeley. Collaborating with English and drama teachers at Pleasanton Middle School and Corte Madera School in the Bay Area, Delattre has written plays mixing mythology, satire, and popular culture, which teach kids this ancient world in a clever and entertaining way.

You, too, can introduce your child to mythology using contemporary media and activities. The illustrated tales in D’Aulaires’ Book of Greek Myths, Arthur Cotterell’s comprehensive Encyclopedia of Mythology, and the animated Hercules are great places to begin your child’s journey to Olympus.

Here’s a dose of this divine realm, as well as activities to get your kid amped:

Prometheus was the creator of man and the son of a Titan (an elder god who ruled before the Olympians). He defied Zeus by stealing fire and giving warmth and light to humans. Zeus chained him atop the Caucasus Mountains, where an eagle plunged from the sky and ate his liver. It grew back each day, and his punishment repeated.

Prometheus is associated with rebellion and artistic freedom, and forward-thinking organizations adopt his name, like Promethean Planet, which provides educator resources. Also, in tech-speak, a hacker is described as "Promethean."

Brainstorm: Ponder the qualities of a modern-day Prometheus. What kinds of people help others? What types defy authority? Create two lists on a piece of paper. For the first, write down actions deemed “good,” like donating food to the poor. Keeping Prometheus’ defiant spirit in mind, compile another column of acts that may better society, but break the rules, like destroying an animal-testing lab.

Aphrodite was the goddess of love, beauty, and fertility, known as Venus in Roman mythology. She had a son, Eros, who wandered about with a bow and arrows, pricking people with darts of love. (Cupid is Eros’ more recognizable Roman counterpart.) Today, Aphrodite is considered a deity of lust and petty desire, but is a fixture in classical art, like Botticelli’s “The Birth of Venus” or the famed Venus de Milo statue.

Create: Draft a scene for an episode of “Mount Olympus Hospital” or “The Gods of Our Lives.” Use Aphrodite and Eros to induce sparks between two unsuspecting characters.

Sisyphus was a king of Corinth whose punishment was to push a boulder up a steep hill. When he reached the top, it slipped from his grasp and rolled down, forcing him to repeat the process for eternity.

The feared spirit of retribution and justice, Nemesis, saw that good and evil were repaid. She was the sister of the three Fates: frail goddesses who controlled man’s lifespan.

The nymph Echo, a spirit of nature, was too talkative. After Hera, the wife of Zeus, silenced her, she could no longer form words, and resorted to repeating the words of others. (She fell in love with Narcissus, who, in turn, loved himself.)

Write: When someone faces a “Sisyphean task,” the person undertakes an impossible mission: Kasey hadn’t studied all week, so acing the test would be a Sisyphean task. Craft a sentence using “Sisyphean,” and do the same for “nemesis” and “echo.”

Pandora was the first woman on earth: a curious being created by Zeus in revenge for Prometheus’ theft of fire. Given a box she was told not to open, she opened it, and unleashed envy, slander, and other evils onto mankind. When she closed the box, she left one value inside: hope.

Metaphorically speaking, to open Pandora’s Box is to set loose an unavoidable flurry of problems. The box also represents the source of life. In the film Tomb Raider: Cradle of Life, Pandora’s Box describes an object holding the key to biological weapons. In the video game House of the Dead 4, the box involves a final level of the game.

Construct: Find and decorate a cube-shaped paper gift box (or an unused shoebox), and label it “Pandora’s Box.” Sift through your memory of movies, books, shows, and video games. When you identify an allusion to this powerful box, note it on a slip of paper and place it inside. See how many references you collect over time. In the meantime, read a fun rendition of this tale, like Carolyn Hennessy’s Pandora Gets Jealous.

Beheaded by Perseus, a son of Zeus, Medusa – one of the ghastly Gorgon sisters – had a head of snakes and a gaze that turned creatures to stone. The 1981 film Clash of the Titans recounts the myth of Medusa with dated – but very cool – stop-motion animation, but the movie is only suitable for mature middle schoolers and up. Perseus and Medusa, a graphic Greek myth by World Almanac Library, and Ross Collins’ Medusa Jones are fitting alternatives.

Mold: After familiarizing yourself with Medusa’s tale, create your version of Medusa, using green clay to fashion her twirling tresses.

Hades, the eldest brother of Zeus, was the ruler of the dead who lurked in the Underworld. Rivers, such as the Styx, separated Hades’ underground realm from the land of the living. He had a three-headed dog, Cerberus, who guarded the gate. Hades was resurrected as the Merovingian, a villain in the Matrix trilogy, while his hound took the form of Fluffy at the Hogwarts School in Harry Potter. The grim reaper, of course, alludes to this lord of the afterlife.

Roleplay: Assuming the persona of Hades, spoof a classified ad seeking a roommate in your gloomy abode. Describe your Underworld: the pit of Tartarus, the dungeon of damned souls, and the Elysian Fields, where heroes go to rest. Be sure to state the prerequisites, including a tolerance for dogs and your temperamental attitude!

Mentored by the centaur Chiron, Achilles was the greatest Greek warrior. But Paris of Troy, aided by the sun god Apollo, struck an arrow in Achilles’ heel – his only vulnerable body part – leaving Achilles mortally wounded. Many protagonists have an Achilles’ heel: a weakness that affects a story’s plot or outcome. Superman’s Achilles’ heel, for example, was Kryptonite.

Screenwrite: Slip into the role of screenwriter and pick a hero (or villain) in a movie. Imagine a different Achilles’ heel for this character. Reconstruct a scene or draft a new ending. For instance, what if Superman wasn’t averse to the glowing green substance, but something else?

Kidnapped by Hades, the beautiful but somber Persephone was queen of the Underworld and daughter of Demeter, the goddess of harvest. Persephone’s journeys from earth to the Underworld explained the change in seasons. (When Persephone reunited with her mother, the earth bloomed, but when she descended to Hades, the land turned barren.) Persephone, also incarnated in the Matrix movies, is an icon in classical art.

Draw: Read about the abduction of Persephone, when Hades snatched her while she picked flowers in a field. On a small posterboard divided in half, draw two versions of the earth: one side illustrates the world when Persephone is above ground, and the other depicts it when she lives beneath us.

The Trojan Horse, as described in Virgil’s Aeneid, was a huge wooden horse in which thousands of Greek soldiers hid and used to infiltrate Troy during the Trojan War. After Troy fell into a slumber, the Greeks emerged from its belly, attacked the city, and won the battle. In the context of today’s technology, a Trojan horse is a computer worm or software that appears useful, but performs a malicious action, like a virus.

Produce: Scan the front page of a major newspaper. See the headlines and photos? Tape two 8.5” by 11” sheets of paper together so they fold open like a newspaper. Using a black marker, create a catchy headline at the top announcing the victory of the Greeks. Underneath, write text that describes the battle and its aftermath, and then draw a picture of this legendary horse on wheels.

As your child will discover, mythology saturates our culture. With a bit of exploration, he'll learn this ancient world of heroes and beasts is alive and well.