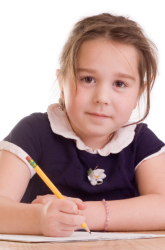 In first grade, kids move from object-based, hands-on math, to more standard pencil-and-paper scribbling. Children still need visual and tactile learning in the mix, but they also need to start transferring many of their mathematical ideas onto paper. Here are some things you can do at home, to help your child make the leap.

Download Article
If your child is having a hard time with the work he brings home, try bringing a concept off the paper and into the "real" world, to help him understand it. For example, if he's struggling with a worksheet on counting the total value of small groups of change, give him actual coins to work with. If basic fractions on a homework paper are puzzling your child, cut up some construction paper to demonstrate parts of a whole; then let your daughter take apart and put together a circle cut into fourths, describing one-fourth, one-half, and three fourths.
Be creative in helping your child succeed at math. Interactive resources are available on our first grade math games page. More materials are available on our math resources page.
We enable strictly necessary cookies to give you the best possible experience on Education.com.Cookie policy