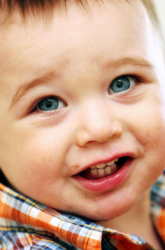 The 7.3 million play sets and 1.5 million die cast cars, all made in China, either could have lead paint or contain small, powerful magnets that can be swallowed. According to the CPSC, if more than one magnet is swallowed, they could cause intestinal damage and other injuries.

Lead paint and magnets are only two of the many reasons products might be pulled from store shelves. Numerous items are recalled every week when the CSPC identifies a substantial hazard or a company reports a defect or concern. But how do hazardous items make it to the public in the first place?

Toys and children's jewelry must meet federal and industry safety standards (for things like lead paint, choking hazards, and sharp points). However, these products are not approved for safety by a federal agency before they're actually sold. Companies are expected to comply with the standards, whether they manufacture products in or import them to the United States. Testing, usually by an independent laboratory, is the only way companies can make sure their products meet all of the safety standards.

What This Means to You

Although lead paint was banned in the United States nearly 30 years ago, lead can still sometimes be found in paint in older homes and, occasionally, in toys and children's metal jewelry made today. Kids can ingest the dangerous, naturally occurring metal when they mouth or swallow something made with lead or lead paint, or when they simply touch it and then put their fingers in their mouths.

Coming into contact with a toy — or anything else containing lead — once or twice probably isn't cause for too much concern. It's continual exposure over a period of time that usually causes lead poisoning, which can bring on a host of health problems like learning and hearing disabilities, behavior problems, and delayed development. But even low levels of lead in a child’s blood can cause subtle difficulties with behavior and learning.

To help reduce kids' exposure to lead in your home:

For more information on the toy recalls, go to the CPSC's website at www.cpsc.gov. Visit Mattel's website at www.mattel.com to see details, including pictures, of the items recalled recalled to find out if you might have some of the potentially hazardous toys in your home.

Note: All information is for educational purposes only. For specific medical advice, diagnoses, and treatment, consult your doctor.

Next Article: Top Green Gifts for Earth Day 2009
We enable strictly necessary cookies to give you the best possible experience on Education.com.Cookie policy