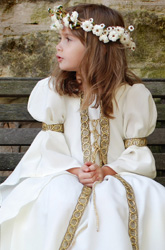 Every child is unique, but sooner or later, every child will go through a phase of medieval madness. Is your child entranced by princesses, filled with dreams of heroic knighthood, or scheming to become a world-famous wizard? If your child is obsessed with castles, moats, and noble steeds, then a medieval party may be just the thing to celebrate a birthday, or to simply have some fun in the sun!

Here’s what you need to get started on your very own medieval backyard birthday party:

If there’s one thing that medieval courts did well, it was feast. And, while a suckling pig and fountain of wine might be a bit out of the family budget, it can be easy and fun to approximate a medieval meal. Meat was the centerpiece, with grains a distant second, but you can feel free to throw in some veggies. Make meat shish-kabobs or cook chicken drumsticks that kids can eat straight off the bone (using only their hands, of course!). Top the meal off with a brimming tankard of non-alcoholic mead, and your kids will be fed, watered, and ready to go.

Middle Ages Mead
What You Need:

What You Do:
Bring the apple juice, honey and water to a boil, and then let it simmer for about 30 minutes. Add cloves, cinnamon or orange slices to taste. When cool enough to handle, strain the mixture. Refrigerate before serving.

Great Garb
A fashionable front was a must in the Middle Ages, so kids should be encouraged to dress for medieval success. That might mean bringing a knight or princess costume from out of storage, making flower or leaf crowns, or improvising on the spot. For a fun crafts activity, try these two medieval hat activities.

Feathered cap
What You Need:

Cut the felt into corner to corner diagonally to form two right triangles. Line the two halves up together, and sew or glue the two shorter sides of the triangle to the corresponding side on the matching triangle.

If glued, let dry. If sewn, turn hat inside out so that stitching is hidden. Fold up the brim of the hat 1” to form a band. Sew or glue feather into the fold of the band at a jaunty angle, pointing backwards.

Princess hat
What You Need:

Hold the file folder open (if you’re using a large piece of paper, fold in half then open). The spot in the middle, where the folder creases, will be the tip of the hat. Take the top right corner, and curl it down into a cone shape. Adjust for size and shape of cone, then staple or glue the folded corner to anchor the cone. Wrap the left side of the folder around the cone, stapling or gluing where necessary, then trim the overlapping paper.

Once you have your cone, string ribbons though the tip of the hat, and decorate with drawings, designs, or stickers! Staple or glue the ends of a short piece of elastic string to serve as a chin strap. Hats should be worn tilted slightly backwards, allowing ribbons to trail.

Note: It may be a good idea to make several cones before the party guests arrive, then to have them decorate their hat as a crafts activity.

Pillow jousting (ages 6+)
What You Need:

What You Do:
Two “jousters” should face one another on the plank, standing with one foot in front of the other, toes touching heel. The distance between two jousters feet should be approximately 1 to 1 ½ feet, depending on their size. Each player holds a pillow in one hand, and keeps the other hand behind her back. During the course of the joust, they cannot move their feet or take their hand from behind their back.

Let the joust begin! Contestants should hit each other with their pillows, with the goal of knocking the other person off balance. But be careful! Doing so without losing your own balance can be tough!

Note: Younger players who struggle may be allowed to free their second hand to use for balance.

Variation: Mounted pillow jousting
An adult or large child carries a smaller child on their back. The “rider” wields a pillow while the “horse” charges past another rider and horse pair. Repeat three times. A panel of royal judges determines the winner based on who had the most direct hits.

Split into two teams of 4+ players each. The objective of the game is to send all the players on the opposing team to “prison.” Each team’s “prison” is located outside the right-hand post of their playing area.

A player throws the ball over the net, calling the name of a member of the opposing team (not necessarily the player towards whom the ball is headed). If the ball is caught, nothing happens. If the ball is not caught, the person whose name was called goes to “prison.”

To free a prisoner, a team must toss the ball over the net and call “prisoner!” If the ball is not caught, the prisoner who went to prison first is released, and can rejoin the team.

Play continues back and forth, with people being sent to prison and freed, until all the members of one team are in prison.

Note: Players must call the name of an opposing team member before the ball crosses the line of the net. If they forget, or call it too late, they are sent to prison. A maximum five seconds of possession time per touch is recommended.


Variation: Storming the Castle (ages 5+)
For younger children who need practice throwing balls, use a lower net, and an assortment of medium-sized balls. Each player has one minute to throw as many balls as possible over the net, while other players hurry to retrieve balls and give them back to him. Whoever throws the most balls in a one minute time period wins (while all players get lots of throwing practice!).

Next Article: It's Party Time! Steal These Kids' Birthday Ideas
We enable strictly necessary cookies to give you the best possible experience on Education.com.Cookie policy