Log in with different email
For more assistance contact customer service
School and Academics
Teacher Quality and Compensation
Merit Pay: What's it all About?

Merit Pay: What's it all About? 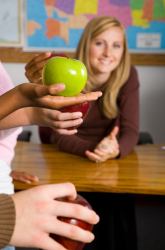 Let's face it: some teachers are just better at their jobs than others. Whether it's holding the power to transfix a restless room of students, inspiring struggling students to try their hardest, or simply making scary subjects accessible, certain teachers have the mojo to make it work in the classroom. But would these successful educators work harder if they were paid more? And would less effective teachers be motivated to step it up?

Traditionally, teachers are paid on a scale that takes only years on the job, and degrees earned, into account. But a growing movement has some school districts figuring another important factor into the teacher pay equation: teacher effectiveness, as evidenced through student achievement. The “merit pay” idea, otherwise know as incentive pay or pay-for-performance, has taken hold in several states across the country, and is one of the most controversial ideas in education today. It can mean offering bonuses to better performing educators, teachers teaching difficult subjects, such as AP math or science, or those who agree to teach in low-performing and challenging school environments.

Of course, outside of education, the idea is nothing new. In almost every industry, the better you are at your job, the better you'll be compensated for the work you do. But schools are not companies competing for resources, and private sector policies are not necessarily the answer for public-school kids. In fact, the National Education Association, the largest teacher's union in the country, has adamantly opposed the idea on the grounds that standardized tests are not a reliable measure of teacher effectiveness. “Just as a standardized test is not an accurate reflection of what a student knows, it is not an accurate reflection of what a teacher has taught,” the NEA said in a position statement on the issue.

But an increasing body of evidence shows that merit pay systems do work—if they're done right. In Arkansas, an ongoing study by the University of Arkansas of a Little Rock teacher pay-for-performance program reports significant gains in student test scores, as well as overall teacher satisfaction with the system. “The results were pretty clear,” said Gary Ritter, PhD, co-author of the study and endowed chair in education policy at the University of Arkansas. “We found a positive effect of program participation, ranging anywhere for 6 to 9 percentile points.” For a struggling school district, or any school district, those are major gains.

However, despite the research reports showing that merit pay can be a payoff, doubts still remain. After all, the idea isn't exactly new—it's just never been implemented successfully on a national scale. Many of those who protest the idea of merit pay say the problem is based on the criteria for “performance,” not in the idea of rewarding hard-working teachers itself. Worries about favoritism by administrators, jealousy among teachers, and instability of incentives have hounded merit-pay measures, with the biggest obstacle still being the most basic: where does all the money come from?

While opponents and proponents of merit pay measure the arguments, most great teachers will have to go on working with a love of teaching to motivate them.

Next Article: Obama on Teacher Recruitment and Retention
We enable strictly necessary cookies to give you the best possible experience on Education.com.Cookie policy