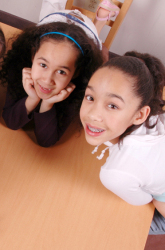 Believe it or not, middle school is all about playing games. Whether it's attitude in the classroom, puppy love on the playground, or texting 'til dawn, middle schoolers love to play games with authority, attraction, and friendship. But playing games can also be a great way to learn, and the middle years are no exception. So, try swapping out cell phones for a night and replacing them with one of these fun, preteen-friendly board or card games - you may learn more than you think about your middle schooler's mind!

In this game of quick thinking and social strategy, players have forty-five seconds to come up with as many words as possible to fit the category card that's drawn. For example, “Fruits” might prompt a grocery list of apples, oranges, and pears. But did you also come up with loquat, plantain, and lingonberry? When time's up, roll the “hit” or “miss” die, then guess which items on your notepad also appear on other people's lists, and which items are shared by no one. This game combines quick, creative thinking with knowing your opponent, and makes for a great playing experience for the whole family.

This number-based logic game – popularized in Japan, where it's name translates as “one number” - has become a hit for its addictive problem-solving allure and simple elegance. Now it's time for kids to take up the challenge! Sudoku 5x5 packs the educational opportunities of the game into the perfect package for fun and learning alike: magnetized number pieces, a magnetic playing surface, and 48 different challenge cards on which to play, ranging from “Beginner” to “Expert” levels. Kids will love the brain-tingling challenge of making each row, column, and colored section contain the numbers 1 through 5. And all while they practice coordination and sequencing!

Can you get from Mauritania to Madagascar in just ten days? In this game of geography and strategy, players must "travel" by plane, truck, or foot. Using a big board, but no pieces, players arrange country and travel cards to chart a course through the geographically and politically complex African continent. This game provides the perfect opportunity to discuss and learn, bringing African geography to life. However, we wished more cultural and historical facts were incorporated into the game, to kickstart learning. Overall, though, this game is a great introduction to the geopgraphy of Africa, and a fun compliment to lessons in African history and politics.

Kids may not recognize the real world value of math skills, but in this buy low, sell high stock market game, multiplication is key. “Stock” cards of different values and colors are arranged in overlapping columns, and players can choose to either invest by buying a top card, or cash in by selling back two of the same color. Because a pair of cards yields the product of their values, kids must practice strategy and mental multiplication to figure out when to dump their stocks, and when to buy. Although the gameplay lacks some pizazz, Ka-Ching! is a great way to help the math medicine go down, especially if used as a fun alternative to multiplication tables and practice sets.

Everyone knows what a birthday party is. But can everyone explain it without using the words “celebration,” “presents,” “balloons,” and “cake”? In Taboo, players must explain something without using the accompanying “taboo” words. Creative thinking, as well as knowing your teammates, go far in this verbal sprint, and players of all ages will take their descriptive skills to new heights.

In this simple game of mental math, players set their minds racing to creatively calculate a target number. The product of two “target dice” makes the “target number.” Then, after rolling three “scoring dice,” players must add, divide, square, and subtract to come closest to the target number in the end. When billed as a game, kids may balk at taking up the challenge, but when played as a fun break from practice sheets and textbooks, Math Dice does the trick.

Are You Smarter Than a Fifth Grader? (Ages 8 to adult, 2-4 players)

Which animal has the largest brain? Who wrote Gulliver's Travels? What are the rules of kickball? Modeled after the popular trivia show, this game tests players' knowledge of fifth grade curriculum, from such subjects as Math, Social Studies, and English, to Music, Physical Education, and Games. While the game presents ample opportunity to learn, the task of keeping game pieces, cards, and money tokens straight takes away from the. fun. A word to the wise: while some might find the questions far too easy, others may struggle, so make sure that all players are of similar skill levels.

If your old Monopoly board has fallen to bits, and you're looking for an update to the faded original, look no further. The creators of Monopoly Here and Now have assembled America's top real estate properties by vote, and the results are sometimes unexpected. Instead of Marvin Gardens or Baltic Avenue, players can purchase Fenway Park or Disneyland – and don't expect inflation-control! Bills range from ten thousand to five million dollars apiece, so players have a realistic chance to buy multi-million dollar properties – realistic, that is, if everyone at the table is a bonafide high-roller. With playing pieces such as a Starbucks mug and McDonald's fries, as well as the classic car and shoe, Monopoly Here and Now mixes old and new to update a classic. But while learning to calculate thousands of dollars in change is an exercise in millionaire math, the overall experience is less educational and more of a sobering look at America “here” and “now” -- Starbucks and all.