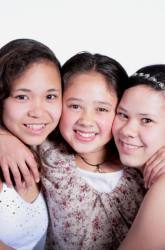 Think fifth grade was a bumpy ride? Welcome to middle school, the roller coaster of puberty, peer pressure, and social insecurity. As their bodies change, so do their social interactions: middle schoolers are constantly seeking to assert themselves socially as they look for affirmation in their newly maturing bodies.

So, how does this pan out in middle school? “More drama!” says veteran school counselor Mary Pat McCartney. “Students are definitely more into each other’s business, who likes who, who’s going to do what, making things up about people.” This increased social pressure, which is created as much by the individual student as by his or her peers, makes for a difficult period of ups and downs. “It can be really tough,” observes McCartney.

Although catty girls and bullying boys might seem to be the exception rather than the rule, middle school mayhem affects everyone to some degree. Because middle school brings with it the onset of puberty, middle schoolers experience a level of self-doubt, insecurity and confusion that don't occur in the earlier grades. It's this new sense of insecurity that fuels the drive to stand out from all the rest, as adolescents look to feed the need for positive affirmation. The result? Fierce competition.

“They’re constantly competing for attention from peers and at home,” says McCartney. “They’re saying ‘notice me!’ ‘Tell me I’m alright’ – they’re seeking reassurance.” Middle schoolers want to be constantly reminded that they are “normal,” even if they suddenly need to wear deodorant or a bra, so they strive to fit in or socially dominate others. In other words, the bigger the drama queen, the more royally insecure the child!

Although an adolescent child may make a parent's attention feel unwanted, now is the time for you to stay closer than ever. “Parents need to keep the lines of communication open,” says McCartney, “and that doesn’t mean always talking to your kid. It means listening, and arranging opportunities to have that happen. Just knowing that parents are available gives kids an out to talk if they need to.” Although the difficult road of adolescence is the only route from childhood to maturity, having a parent in the passenger's seat can make all the difference.