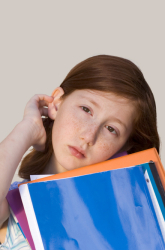 For many educators, No Child Left Behind represents a fundamental dividing line in time. As recently as a decade ago, individual school districts had more or less final say on curriculum, and teachers could approach it in a wide spectrum of ways. Some states, such as New York, did offer some standardized courses approved by the Board of Regents, but these were aimed at high school alone. None of it approached the scope of NCLB.

Today, the federal government contributes approximately 9% of public education funding, and the money comes with stringent requirements. All curriculum must align with state standards, all students K-12 are tested every year on statewide tests, and entire schools face consequences if they don’t improve on target.

And what does this mean for kids? Six years into No Child Left Behind, Margaret Spellings, U.S. Secretary of Education, is feeling good. “NCLB changed the education game in this nation,” she recently testified, “and we can be proud of where it has brought us.”

But not everyone agrees. While NCLB may have helped some kids reach “proficiency,” critics believe that the law’s emphasis on skills, standards and test scores may have a serious downside, especially for gifted children. Over four decades in education, Dr. Joseph Renzulli, Ph.D., Director of the National Research Center on the Gifted and Talented, has seen special initiatives come and go. What has not changed, he has found, is gifted kids’ need for sophisticated intellectual challenge and enrichment.

Gifted kids, he explains, think in highly complex, creative and analytic ways. In order to nurture them, trained educators must “provide them opportunites, resources, and encouragement within their areas of interest.” A child gifted in physical science, for example, will wilt if the entire curriculum is a list of facts to “master,” but will come alive—and perhaps become one of America’s great inventors—if offered a chance, for example, to apply key concepts to the creation of a robotic device, create it in a real lab and be critiqued by a real scientist. Such educational experiences will be pivotal for a gifted child—but, sadly, irrelevant to many state exams.

In fact, says Renzulli, “We put far too much emphasis on test scores.” And with NCLB, he says, “we’re holding a gun to teachers’ and principals’ heads. There’s an old saying: ‘What gets tested, gets taught.’ So we’ve saddled the schools with endless drill and kill…and these kids aren’t being challenged and haven’t been able to grow.”

Advocates for the gifted and talented point to recent research by Drs. Derek Neal and Diane Whitmore Schanzenbach of the University of Chicago, which found that while NCLB did seem to improve the performance of children already near proficiency, “these same systems provide weak incentives to devote extra attention to students who are clearly proficient already.”

For officials at NCLB, however, these arguments pale beside the overwhelming benefits of the program. Casey Ruberg, spokesperson for NCLB, points out, for instance, that “”since the passage of No Child Left Behind, the top 10% of students have continued to perform well in reading and have shown significant increases in math achievement on the Nation’s Report Card….[2007] Math scores for 4th and 8th graders were higher than they’ve ever been in the history of the Nation’s Report Card.” And for those kids looking for even more challenge? States still control 91% of school budgets, and, says Ruberg, they can still exercise creative approaches. But federal officials are doing their part too. “We have proposed expanding access to advanced placement programs," she says. "More teachers will be trained to lead Advanced Placement and International Baccalaureate classes.”

So what does this mean for your child? With NCLB now firmly established, it’s more important than ever to stay in touch with your teachers, your child, and your school. In practice, schools are working hard to balance kids’ individual needs and learning styles with the civic responsibility to help all of them meet standards. Many state teaching licenses now offer special credentials in gifted and talented education, and institutes like Renzulli’s National Research Center on the Gifted and Talented have published supplemental curriculum available on the Web. In fact, as Renzulli himself says, “There is no quick and easy answer….In life, we can’t always have everything the way we want it, and sometimes kids must do some things they hate because they know there’s other material they just love and that will keep them engaged in school.” Working together, parents and teachers can, with luck and skill, find that balance.