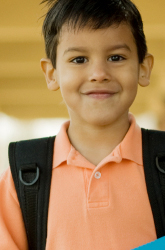 No Child Left Behind (NCLB) – some love it for its insistence on accountability, and focus on the basics; others feel its focus is too narrow, and that it increases demands on teachers. But there is one group of kids who are experiencing marked improvements in their education as a result of NCLB: English Language Learners (ELL's).

These are the kids who don't arrive at school speaking English as their first language. They are normally immigrants or the children of immigrants who enter the mainstream school system having to adjust not only to a new language, but often a new culture as well.

Since NCLB was signed into law in 2002, ELL's have faced some special challenges. Prior to NCLB, these kids were often taught in a piece-meal fashion without a strong and focused curriculum. But NCLB has brought new and specific requirements for ELL's to the classroom, prompting many school districts to modify - or even completely rework - their curriculum for ELL's to meet the new standards.

To add to the pressure, the schools' report cards are also being evaluated. To receive Title III funding (designated for ELL programs) under NCLB, state and local education agencies are obligated to increase the English proficiency and core academic content knowledge of ELL students. Under Title III, local school districts decide on the method of instruction to be used to teach ELL students English, with the requirement that instructional programs be scientifically proven to be effective.

Basically, the passage of NCLB brings ELL students into the same context of standards and accountability as their native English-speaking peers. This has some major implications for regular classroom teachers, a lot of it having to do with test-taking.

John Weimholt, an ELL teacher and Testing Coordinator in St. Paul, Minnesota, says NCLB has prompted his school to do a lot more test preparation with ELL kids. He says, "We take time to prepare the kids for the testing. We're doing that for two classes per week. We want to make sure they've got the [test-taking] strategies down. We've redoubled our efforts to make sure they're used to it."

While Weimholt believes that NCLB has prompted school districts to become more focused on ELL education and "get more done", he says kids are anxious and feeling the burden of a lot of high-stakes test-taking. As Weimholt points out, "The test is really long – with no time limit. It's not really exciting for the kids. Are they motivated to stay focused on the work? That's the biggest challenge to the kids. It's a big, long, test. Do they have the stamina to get through it?"

But, at the very least, NCLB has ensured that ELL students are getting the same “accountability” treatment as their English speaking peers—tests and all.

Next Article: Current Issues and Trends in Assessment in Early Childhood Education
We enable strictly necessary cookies to give you the best possible experience on Education.com.Cookie policy