A New Approach to Behavioral Challenges 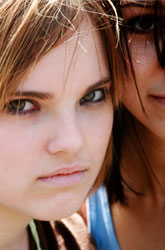 Detention. Retention. Suspension. Expulsion. These disciplinary techniques are widely used in schools across America as part of the zero-tolerance policies implemented to reduce violence and behavior problems. The Department of Education  reports that public elementary and secondary schools assign 110,000 expulsions and 3 million suspensions each year, with detentions in the tens of millions. But, do these forms of punishment really work to correct the behaviors of challenging kids?

According to a recent study by the American Psychological Association (APA), the answer is no. The zero-tolerance task force report reviewed ten years of data, and concluded that these policies do not improve behavior or academic performance, and actually had several negative effects, such as: higher drop-out rates, less satisfactory school climate ratings, higher rates of future misbehavior and suspension, and more time spent on disciplinary issues.

There is another way for schools and parents to handle kids with challenging behaviors, says Ross Greene, PhD, associate clinical professor in the Department of Psychiatry at Harvard Medical School, and it's called Collaborative Problem Solving.

The premise behind Greene’s method is this: kids with challenging behaviors lack important thinking skills. It’s not that they’re lazy, manipulative, attention-seeking—or any of the myriad labels society gives to troubled kids—it’s that they don’t have the skills not to be challenging.  “Kids who are challenging lack crucial cognitive skills. Namely flexibility, adaptability, problem solving, and tolerance,” Greene says. “This flies in the face of the traditional mentality about challenging kids.”

When behavioral challenges are seen as developmental delays, then the whole system of reward and punishment is thrown into question, Greene says, and just as we don’t punish children with gross motor delays for not being able to play kickball, so we shouldn’t punish children with developmental delays when they aren’t able to adapt to the demands being placed on them. “I don't think a whole lot of people understand what happens to kids when we don't understand their difficulties very well and we apply strategies that don't fit them very well,” he says.

Instead, Greene says the focus should be on what skills the child is lacking and what situations precipitate his episodes—what Greene calls Plan B. “It’s about understanding and assessing each kid and identifying the unsolved problems,” he says.

Wondering how Plan B works in the classroom? Here are the ingredients to making the Collaborative Problem Solving model work:

Ingredient 1: Information gathering and understanding.
Take time to ask the child about the unsolved problem that is standing in his way.

Ingredient 2: Adults get their perspective on the table.
Those concerns usually has to do with safety, lost learning, or how the behavior is affecting others. This is called the empathy step.

Ingredient 3: Brainstorming solutions.
These address the concerns of both parties.

How does this play out in practice? Let’s say a student always seems to have trouble getting started on his social studies assignment:

Greene admits that for teachers, who may have multiple students with behavioral challenges, it’s hard work, “but teachers are working hard already with the challenging kids in their class. Let's make sure what they're doing is working.”

It’s working at elementary schools in Newton, Massachusetts, according to Craig Murphy, EdD. Murphy oversees a grant from the Department of Education introducing Collaborative Problem Solving to 15 elementary schools in Newton. He says between January and May of last year, discipline referrals at the school were reduced by 58 percent. Teachers at Newton have also reported that because the Collaborative Problem Solving model shifts the attention to early intervention, it actually saves time in the classroom.

Beyond time, Murphy says teachers have gained a fresh perspective on challenging behaviors through the training they have received from Greene. “That new perspective benefits kids,” he says.

And, this new way of understanding challenging kids benefits parents, too, says Murphy, who all too often are blamed for their child’s behavior. “Now, we’re bringing parents to the table to figure out how we can support the student better across the two areas of his life. If we can remove that contentious relationship it removes a great barrier between the two parties,” he says.

Greene says parents can use the Collaborative Problem Solving model at home, too, as a way of addressing their child's behavioral challenges, but encourages parents to take it one step at time. "Understanding why your child is challenging in the first place is step one. That alone is crucial, even without Collaborative Problem Solving," Greene says. Once you get passed this milestone, he says, you can move into understanding what skills he’s lacking and what’s getting in his way.

The main idea behind Greene's method is reciprocal interactions with kids: asking questions about why they're behaving the way they are and what can be done to solve the problem.

Whether this method begins to gain traction or not, one thing is certain: schools are looking for a change in disciplinary measures, and detention slips may one day be a thing of the past.

Next Article: Positive Guidance and Discipline Strategies: Description and Explanation
We enable strictly necessary cookies to give you the best possible experience on Education.com.Cookie policy