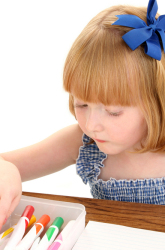 Are America's children prepared for formal schooling? A new study by the National Study for Education Statistics is out to find an answer. It's called the Early Childhood Longitudinal Study Birth Cohort, or the ECLS-B for short. And if you've got a kid on the road to kindergarten, read on. Because the study has a lot to say about how the home affects school success.

Though other studies have attempted to assess literacy, language, and math skills, this is the first nationally representative study of early child development. That means that it includes children from poor families, those with special health needs, children from language minority households, twins, children with low birth weights, and Native American and Alaskan Native children. It all started in 2001 with the study of 10,0000 newborns, and the study has followed their progression leading up to entry into kindergarten.

According to the study, single parenthood can have an affect on reading readiness. Children with two-parent families scored higher than children with single-parent families in several aspects of early literacy, such as identifying letters of the alphabet, understanding the sounds of spoken language and reading from left to right.

This came as no surprise to Bruce Fuller, Ph.D., Professor of Education and Public Policy at the University of Berkeley. “Divide the number of kids in a family by the number of adults. As the ratio goes up, the cognitive growth of the child tends to flatten out,” he says. “More adults mean more language, stimulation and responsiveness.”

What else affected success? Gender, for one. The ECLS-B tested children on vocabulary and comprehension, and on their ability to reproduce a story in their own words. On average, girls scored much higher on these tests than boys.

Early exposure to literacy and language is important because of its snowball effect, says Craig Ramey, Ph.D., Director of Georgetown University Center on Health and Education. The more symbols a child has with which to represent the world, the better her development, according to Ramey. He says some kids come to kindergarten with a vocabulary smaller than 500 words, others come with a vocabulary bigger than 15,000 words. “Imagine those children when the teacher begins to talk in upper middle class language. For the poor kid with the smaller vocabulary it might as well be Greek, and that child may come to feel ashamed,” he says.

When it comes to math, the results show that the higher a child's socio-economic status, the better her ability to recognize numbers and shapes.

Jennifer Park, who manages the ECLS-B, says the study is groundbreaking because it includes a diverse group of children, allowing analysts to understand the differences in their development over time. “By the preschool year, we begin to see differences emerge that might be later called the achievement gap when children are enrolled in school,” she says.

That achievement gap can be prevented by intervening in a child's development with quality care, Ramey says . And the study gives credence to that movement by providing practical data that will trickle down to people in positions to make change, like policymakers, pediatricians, and others.

But, that will all take time. For now, academic researchers like Ramey and Fuller will analyze and interpret the data. For example, Fuller says he is particularly interested in looking at the characteristics in Asian families that make for such successful early childhood development. By the time the Asian children in this study were 4, their cognitive growth was already ahead of Caucasian children. “We do know that when parents create structured learning opportunities, it yields higher learning curves for young children and we want to look at that further,” Fuller says.

In the meantime, parents, research your child's early education options through your state's childcare resource and referral agency. And, of course, stay tuned: the field of education research is buzzing, and this study is sure to spark debate.

Next Article: Considering Kindergarten
We enable strictly necessary cookies to give you the best possible experience on Education.com.Cookie policy