Obama on Teacher Recruitment and Retention 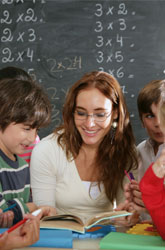 The teacher shortage in the U.S. is nothing short of a crisis. According to the American Board for Certification of Teacher Excellence (ABCTE), America needs 240,000 teachers every year, and one in five teachers in the U.S. will retire in the next five years.

President-elect Barack Obama says he is aware of the need for high-quality teachers and has plans for "recruiting, retaining, and rewarding an army of new teachers.”

Education researchers, such as Van Dempsey, EdD, Professor and Dean of the School of Education at Fairmont State College in West Virginia, are encouraged by Obama’s focus on teacher preparation and retention. “The number one reason we’re losing teachers is the quality of work life of teachers,” Dempsey says. “In many schools and in many contexts, there’s an unfortunate equation of inadequate preparation coupled with not much being done structurally to address the challenges teachers face.”

Obama’s Pre-K-12 plan emphasizes the goal of fundamentally transforming the teaching profession “by ensuring that it offers high-quality opportunities for professional growth and career development, as other professions like law, medicine, architecture, engineering and accounting do.”

This goal resonates with many education researchers. Autumn Tooms, EdD, Professor of Pre-K-12 Educational Administration at Kent State University, is troubled that education as a profession is treated differently from other professions when it comes to accreditation. “I want our president to recognize that there are different ways to accreditate teacher leaders,” Tooms says. “I could be a teacher that says, ‘you know I really enjoy doing this after school club, so I’m going to take these weekend classes so I can become an administrator.’ That leads to individuals becoming leaders who may or may not be competent and understand curriculum to its depth.”

Obama addresses accreditation and other issues in his detailed plan for recruiting, preparing, retaining, and rewarding America’s teachers. Here’s a summary of the plan:

Recruit Teachers Obama will create new Teacher Service Scholarships that will cover four years of undergraduate or two years of graduate teacher education, including high-quality alternative programs for mid-career recruits in exchange for teaching for at least four years in a high-need field or location.

Prepare Teachers Obama will require all schools of education to be accredited. Obama will also create a voluntary national performance assessment so we can be sure that every new educator is trained and ready to walk into the classroom and start teaching effectively. Obama will also create Teacher Residency Programs that will supply 30,000 exceptionally well-prepared recruits to high-need schools.

Retain Teachers To support our teachers, the Obama plan will expand mentoring programs that pair experienced teachers with new recruits. Obama will also provide incentives to give teachers paid common planning time so they can collaborate to share best practices.

Reward Teachers Obama will promote new and innovative ways to increase teacher pay that are developed with teachers, not imposed on them. Districts will be able to design programs that reward accomplished educators who serve as a mentor to new teachers with a salary increase. Districts can reward teachers who work in underserved places like rural areas and inner cities. If teachers consistently excel in the classroom, that work can be valued and rewarded as well.

Rewarding teachers is one of the more controversial points of Obama’s Pre-K-12 plan, particularly the issue of merit pay, which Obama proposed during the campaign. The National Education Association (NEA) has long been opposed to merit pay, financial reward for teachers based on merit, which can include a number of criteria, including improved test scores. Many educators and policymakers have expressed concern that if teachers are rewarded for better test scores, they will be forced to teach to the test—similar to the debate over No Child Left Behind.

The NEA chose to endorse Obama despite their opposition to merit pay; however, Obama made it clear that he would continue to support merit pay for teachers.

In a speech to the NEA last July, Obama said, “Now I know this wasn’t necessarily the most popular part of my speech last year, but I said it then and I’m saying it again now because it’s what I believe and I will always be an honest partner to you in the White House.”

“I have mixed feelings about merit pay,” says Cindy Reed, EdD, Professor of Educational Foundations, Leadership & Technology at Auburn University. “I think merit pay can be an incentive to encourage taking on additional responsibilities to furthering one’s professional growth, but I think there’s a danger in terms of what criteria are used to determine who gets merit pay and for what reasons.” Reed says there needs to be an open series of conversation about what would constitute meritorious teaching and how one would assess that.

Reed, who serves as Director of the Truman Pierce Institute, a research and outreach unit in Auburn University’s College of Education, believes rewarding teachers needs to go beyond financial rewards. “We need to find ways to make sure teachers are receiving intrinsic and extrinsic recognition,” Reed says. Reed emphasizes the need to recognize teacher leaders within the school system and for authentic opportunities for teachers to become involved in the decision making about what happens in the schools and communities. At the same time, Reed says, “In order to make more money, a teacher shouldn’t have to leave the school and become an administrator.”

Parents and educators across the country are looking to Obama to make some important changes to the public education system. “I think there is a real opportunity here for the Obama administration to provide some sense of direction at the national level about the role and purpose of public school in the United States,” Dempsey says. “We need an articulate leader who can say, ‘This is where we’re going and this is how we’re going to get there.’ It’s a matter or being able to articulate what that picture looks.”

What are Obama's other plans for education? Check out Obama on College Funding, Obama on Early Childhood Education, Obama on NCLB, Obama on School Choice, and Obama on Math, Science, and Tech Education.

January 12, 2009
Next Article: Is Your Pre-K Teacher Giving What They Get?
We enable strictly necessary cookies to give you the best possible experience on Education.com.Cookie policy