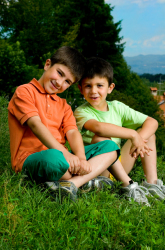 If your second grader is an angel at home and a dream in the classroom, its easy to assume that there's smooth sailing ahead. But second grade marks the time when children begin to establish a sense of identity, and it's this process that will lead to the tumultuous years ahead. Whether it's on the playground, in the hallways, or when adult attention is elsewhere, how second graders relate to and interact with each other can shed some light on the complicated process of growing up.

According to Mary Pat McCartney, a veteran elementary school counselor, second grade marks the development of social groupings, and inclusive/exclusive social interactions begin. “You start to see more of the boy/girl separation,” says McCartney, “and gender becomes important, especially in the second half of second grade.” Issues such as crushes and “cooties” take center stage in the second grade years, as children try to understand what makes boys and girls different, and how they can relate.

In second grade, children also begin to realize the importance of having friends. “They feel a need to identify themselves socially,” says McCartney, “and they start to draw sides.” Although the friends that a child can claim as his own give him a much-needed sense of confidence, children that are excluded from playground activities can suffer a major blow to their self-esteem. To nip this in the bud, McCartney encourages parents to teach their children empathy early on. She suggests asking your child how they would feel if the tables were turned, and modeling empathy by expressing concern for the feelings of others. “As soon as kids forget that other people have feelings and that those can be hurt, then they feel like it’s no big deal,” says McCartney.

The good news? While second grade is just the tip of the iceberg in terms of the social trials that lie ahead, a child's growing social awareness marks the development of skills that will serve him for life. Increased social capacity can be put to good use in the second grade, as children learn to interact constructively and to work together. “Out on the playground, you start to see more cooperation, give and take, and ability to play an organized game,” says McCartney. And cooperation is something we can all get excited about!