Log in with different email
For more assistance contact customer service
Learning and Your Child
Motivation and Achievement
Should Schools Pay Kids for Good Test Scores? 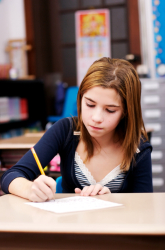 It’s an age-old tactic: want to get your kid to try hard in school? Pay for grades! Lots of families have tried it, but does it really work? For decades, educators have said no. But in this age of high-stakes testing and “accountability,” some researchers, as well as practitioners, are starting to have second thoughts.

New York City Public Schools, for example, recently launched a landmark “Spark” program under the guidance of Harvard economist Roland Fryer, Ph.D. In New York City, all fourth and sixth graders take ten city-wide tests a year—roughly one per month—which measure how well they are progressing on state standards. This year, fourth and seventh graders from 60 schools will be paid for completing each test, with a bonus for each score up to 100%. Formal results will not be available until Harvard researchers have completed a thorough analysis, but in this early phase, teachers happily report some new and different attitudes: kids looking forward to tests, double checking answers, and looking at results to see what they need to learn better. In other words, they’re showing skills that lead to lifetime habits of successful study.

Or are they? When Deborah Stipek, Ph.D, Dean of the Stanford School of Education, talks about paying kids for their behavior, she loves to tell the tale of the old man and the naughty kids who kept banging on his door. One day, he opened his door and promised them 25 cents each if they’d keep it up. They did, with gusto. The second day, he came out again, but said, “Oh, today I only have 20 cents.” They continued, but with less enthusiasm; finally, one day, he said, “Sorry, nothing left.” "You mean,” they said, “You want me to keep doing this for free?”

The story, says Stipek, is a powerful lesson for parents and educators. “Once you give very salient rewards, then the message is, ‘this isn’t worth doing for its own sake.’” In the long run, she explains, research shows that “incentives undermine motivation”—even if it’s a task a student once enjoyed.

So how can parents and schools keep these children on track? Stipek says the answer, lies not in quick rewards, but in “deep, long-term solutions” such as providing personal contact with long-term advisers, and offering curriculum which is relevant and engaging. Stipek and colleagues at Stanford helped to found the East Palo Alto Academy in California as a model school for this approach, lowering the class-size and taking a personal approach to learning. An overwhelming majority of the student population comes from impoverished backgrounds. Stanford points with pride to the fact that 90% of graduating seniors go on to attend college.

For New York school administrators, however, such model school approaches just don’t reach a wide enough range of kids, and they don’t necessarily meet the need to show the “tangible value” of school. As Deborah Wexler, spokesperson for the New York City Department of Education, puts it, “You’re expecting a lot, if you ask a fourth grader to have the wisdom and foresight to look down a path that’s ten years long, especially if they’ve had very few visible role models.”

This is not to say, she adds, that the department doesn’t want kids to love learning for its own sake. Rather, it is exploring the idea that incentives like the Spark program will offer a chance to try out and establish good habits for the future—to “cultivate that love of learning by lighting a spark.”

Longtime researchers like Stipek remain skeptical, however. “Sure,” she says, “everybody likes the idea of incentives because they’re simple and they look easy. But that’s not a long-term, real solution.” If we want kids to flourish for a lifetime, she says, we need to show them “strong educational commitment” all the way through.

In the end, whether they favor incentives or despise them, all researchers do agree on an ultimate goal: every child deserves to learn and achieve in order to move into productive adulthood. In a perfect world, this would happen without much adult push; and if you’re considering incentives for your child, it’s best to think of them as a last resort. But still, in the real world, can incentives help? Fryer’s researchers are working hard on that very question. Parents, stay tuned.

Next Article: Help Your Kids Reach Their Potential
We enable strictly necessary cookies to give you the best possible experience on Education.com.Cookie policy