Give Peace Camp a Chance 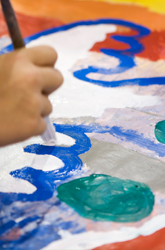 Peace, love, and a long canoe trip? Sure, peace camp may sound like more kumbaya than kids can take, but sending your child to peace camp doesn’t mean sacrificing summer fun to lectures on conflict resolution. The following camps offer traditional activities as well as the rare opportunity to meet kids from different backgrounds, learn about other cultures, and perhaps take a few steps towards a gentler world.

Luethi-Peterson Camps for International Understanding, Freedom, New Hampshire and Birch Point, Maine
Founder Natalie Luethi Peterson said, "Luethi-Peterson Camps, founded in 1949 after WWII, bring together children from various countries and cultures, in order to widen the campers' horizons and to teach them responsible community living.” The idea is to throw kids into idyllic locations in the US and Europe, give them plenty of time to do traditional activities like sports, music, art, drama and hiking, and add self-government to help everyone develop concern for the community, problem-solving and leadership skills.

Peace Camp, Berkeley, Lakeport, and Santa Rosa, California
At twenty years old, Peace Camp is vintage California – but its emphasis on teaching kids of different backgrounds to get along is timeless. This all-day day camp is not-for-profit and uses skits, songs, swimming and art to bring the message home.

Seeds of Peace, Otisfield, Maine
With an advisory board that includes President George Bush, former President Bill Clinton, Queen Noor of Jordan, Israeli President Shimon Peres, and Chief Palestinian Negotiator Sa’eb Erekat, Seeds of Peace is the most famous peace camp and arguably the most ambitious. The program aims to empower future leaders from conflicted areas. Its focus is on the Middle East, but it also draws students from Cyprus, the Balkans, and South Asia. When the summer ends, campers continue participating in regional programs all over the world.

Kids for Peace, Maryland (four locations)
“It is our greatest hope that by exposing campers to both the beauty of world cultures and the challenges that face children in different parts of the world, they will begin to realize the potential they have as world citizens. We hope to open these children's minds to the role they might some day play in the world, to dispel fear at the differences between people and make them feel comfortable and confident in their interactions with those different than themselves,” says Director Mary Hilton.

Florida Coalition for Peace and Justice, Hampton, Florida
This multi-cultural camp is literally that; kids camp out in tents, learning how to cooperate, practicing conflict resolution, and studying the “interconnectedness of all living things.” They also enjoy traditional camp activities like tubing, hiking, canoeing, and swimming. To insure diversity, parents pay on a sliding scale.

Whether they’re future world leaders or simply kids hoping to learn more about the world, your children could learn a lot at peace camp – and you’ll have peace of mind in knowing they still got their s’mores.