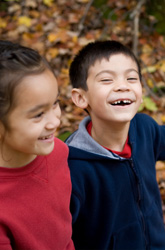 He was a writer, a philosopher, an abolitionist, an environmentalist, a conscientious objector and a life-long learner. But Henry David Thoreau is perhaps best known for his love of the outdoors—his 1854 Walden is a spiritual autobiography, a social critique and a rhapsody to nature. While many see this icon of transcendentalism as the intellectual territory of Ph.D. students, Thoreau was also beloved of children in his time. Thoreau believed that children learned through exploration and conversation, and today even the youngest of his "spiritual children" can benefit from learning about his ideas on subjects such as nature, simple living and self-reliance.

Thoreau the Writer Walden is perhaps a bit too intense for younger readers, but Deborah O'Neal and Angela Westengard have penned a delightful children's book called The Trouble with Henry: A Tale of Walden Pond. Rich in sensory details, it takes readers through the seasons at Walden Pond where an unconventional Henry David Thoreau works to protect his beloved woods from becoming a toothpick factory. The lesson inherent in the book will not be lost on even the smallest readers as they learn to appreciate nature through the beautiful illustrations of S.D. Schindler's.

Equally charming is D.B. Johnson's Henry Builds a Cabin in which Thoreau gets advice from friends Emerson, Alcott and other Concord luminaries on how to best go about building his famously humble house. This book is even part of a series on Thoreau—Henry Climbs a Mountain, Henry Hikes to Fitchburg and Henry Works are other books in the group.

Thoreau the Architect Although he only lived there for just over two years, Thoreau will be forever associated with the tiny cabin—only one room ten-by-fifteen feet!—that he built at Walden Pond on the land of his friend and fellow philosopher, Ralph Waldo Emerson. To give children a feel for the size of the cabin, consider taping off a ten-by-fifteen foot area on your kitchen floor or drawing it as a chalk outline on your driveway. Ask your children to think of things that would fit in Thoreau's cabin—and things that wouldn't. It's a great way to teach them that most basic tenet of Thoreauvian insight: "Simplify, simplify."

Fiddlers Green, a whimsical treasure trove of high-detail paper models, offers a color model download of Thoreau's cabin for free. While little hands won't do well with the intricate cutting skills needed for this project (consider printing many copies in case of slip-ups), older children might be able to handle the work under supervision. A young child can at least help glue the model together. After the model is put together, kids can click on the interactive thumbnail version of the plans to see corresponding text from Walden. Spartan furnishings and a paper base to represent the woods and pond complete the cabin model. Having read The Trouble With Henry, children will know to make sure the Fiddlers Green plan includes three chairs—one for Henry, two for visitors!

Thoreau the Naturalist Above all, Thoreau loved nature and was passionate about walking. A nature walk in the spirit of Thoreau is an activity that could work equally well in a backyard, a park, or a botanical garden—anywhere outdoors will do. Children can identify plants, watch birds and talk about how the environment where they live is different from or similar to the New England of Thoreau's Walden Pond. The natural world is at once engaging and novel to children, and it will not be difficult to keep even the ever-fickle attention of a preschooler on the hike. Easy games like "I spy" can enhance the walk for any age group, and older kids may want to bring along sketch pads or a camera to depict and catalog finds for later. With some advance preparation, a nature hike could even be turned into a visual scavenger hunt for older kids (provided they understand the maxim "Take only pictures, leave only footprints").

The nature hike also provides a great opportunity to share ideas on caring for nature, such as throwing away garbage and recycling cans, plastics and paper products. You may want to discuss what can be recycled and what can't, or perhaps create a sorting game.

Thoreau the Music Lover Thoreau loved music as well as nature. His aptitude for singing and playing flute is well documented in his journals and correspondence. His 1820 flute, probably originally owned by his brother, John, is on display at the Concord Museum and can be viewed online by searching the museum's Thoreau Collection.

Making a "flute" out of simple materials is easy and a fun way to let children connect with Thoreau's love of music. To make this instrument, you will need a cardboard roll (anything from a toilet paper roll to a wrapping paper roll will do), scissors, waxed paper, a rubber band and a pencil.

Children may first want to decorate their cardboard roll using crayons, markers or stickers. Following this, mark off about 3-7 holes on the roll (the body of the instrument) about an inch apart. Using scissors or a sharp pencil, cut these out so that each hole can be easily covered by a finger.

Now cut a piece of wax paper at least 4 inches square. Attach it using the rubber band to one end of the "flute". Humming into the open end of the tube will create a kazoo-like effect, and children can experiment with different notes through varying finger placement on the holes.

While Thoreau's ideas may seem too big for the mind of a child, who better than a young person to understand the wisdom of a man celebrated for living simply?