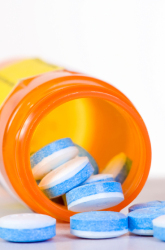 From a young age, kids learn that medicine is a good thing. It calms coughs, soothes sore throats, and eases fevers. But by adolescence, some children are discovering that prescription drugs have some less than Hippocratic uses, and their recreational use as mind or body altering drugs has skyrocketed in the past years.

At the same time, the U.S. is enjoying a remarkable decrease in the use of alcohol, tobacco, and so-called “street drugs” among adolescents. What gives? “For more than 15 years, we've known that the one thing that correlates most to increases or decreases in drug abuse is the perception of risk and social disapproval,” says Tom Hedrick, a founding director of the Partnership for a Drug-Free America. As social disapproval of street drugs has grown, and the risks of such drug use has been publicized more effectively, abuse of street drugs has slowly, but surely declined.

Prescription drugs, however, have “an incredibly powerful safety profile that has carried over in all use,” says Hedrick. “What kids tell us over and over again is, 'It's medicine. How bad can it be?'” Kim Caldeira, a Faculty Research Associate at the Center for Substance Abuse Research at the University of Maryland, agrees: “The conventional wisdom among the research community is that these drugs are perceived as safer because they're medicine.”

According to Hedrick, the most commonly abused medicines are prescription painkillers such as Vicodin and Oxycontin, with nearly 1 in 5 teens having abused the medicines. Prescription stimulants, such as Ritalin and Adderal, are also high on the list of frequently abused drugs, perhaps because of their use as ADHD medications among children and adolescents. Also widely abused, with about 1 in 10 teens reporting having used them, are sedatives such as Xanax, Valium, Nembutal, and Dextromethorphan, an ingredient in over-the-counter cough medicines.

Part of the problem, says Hedrick, is that parents are either unaware of the trend, or not adequately informed of the risks presented by a new generation of drugs. “This cohort of parents see themselves as very drug-experienced,” he says. “But what they fail to understand is that the drugs they are familiar with are not the drugs that kids are using today.” And, while most parents don't actively support raiding the medicine cabinet instead of the liquor stash, Hendrick says that some parents feel relief when they learn that their child is experimenting with prescription drugs rather than “hard” drugs. But with a rising number of fatalities linked to prescription drug abuse, it's time parents adopted a different perspective. “Drug use is drug use,” says Caldeira. “They should not consider it to be harmless just because it's a prescription.”

Once parents recognize the risks of prescription drug abuse, how can they safeguard against it? The top priorities, says Hedrick, are to educate yourself, and communicate with your child about the facts. “Parents are not including prescription drug abuse in the ongoing discussions they have with their kids,” he say. “We need to do a better job communicating.” He also recommends keeping a close eye on the contents of your medicine cabinet, and getting rid of medications that you no longer need, as the medicine cabinet is the primary source of these drugs for kids.

“This is the largest change in the landscape of drug abuse we have seen in the last twenty years,” says Hedrick. So don't get stuck behind the times: get ahead of this troubling trend by educating your family and friends on the risks of prescription drug abuse. Hippocrates will thank you.

Next Article: Celebrate Red Ribbon Week for a Drug Free America
We enable strictly necessary cookies to give you the best possible experience on Education.com.Cookie policy