Make Your Child a Punctuation Princess 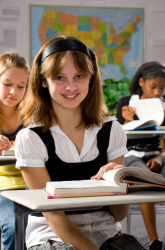 Grammar. Some love to hate it, others get shivers up their spine when they see someone write, “Thank God its Friday.” Regardless of your opinion, the fact is that grammar rules are still a major part of the high-stakes standardized tests your child will most likely take at some point in her academic career. Yet, at the same time, experts say we are teaching grammar less effectively than we were 30 years ago.

While getting your child excited about a comma may seem like an impossible task, there are ways to give your child a passion for, and understanding of, the written language. One thing on which all the experts agree: a punctuation guide isn't going to do it. In their article “Teaching Grammar Effectively: Learning to Like Grammar” (Place of Grammar and Writing Instruction, Heinemann:1995) two professors of English at Illinois State University, Irene Brosnahan and Janice Witherspoon Neuleib, propose that the majority of students don't learn grammar best by the “drill and kill” method which focuses on a prescribed set of rules. “We found most people learn best by action and exposure,” Neuleib says. In fact, she points to research showing that kids who score highest on writing tests are learning grammar through reading and writing, not by rote memorization. While many charter and private schools are implementing these expressive forms of grammar instruction, many public schools are still teaching grammar rules the old fashioned way. But parents can help kids develop a more positive attitude towards grammar. So, toss that text book, and get a load of these ideas you can implement at home:

Read, read, read. You've heard it before, hear it again. Neuleib says parents need to see the value of sharing in the joy of the written word with their child from an early age through books, stories, songs, etc. When your child starts to read on her own, make sure she's having fun with it. Neuleib says it's far more important to get kids excited about reading, than to force particular books on them which ultimately do little more than turn them off altogether. She says she gives her granddaughter Simpsons Comic Books because “she buzzes through them in no time, absorbing English by the spoonful.” Brosnahan says the importance of reading can't be emphasized enough, because we pick up much of what we know about grammar subconsciously between the pages of a book. “Through reading children figure out language for themselves, making hypotheses for how the language works,” she says.

Put pen to paper. Writing is a great way to practice language mechanics that kids are picking up by osmosis in their reading, says Brosnahan. Just keep in mind, she says, that kids are going to be focusing on what to say, rather than how to say it, and that's completely natural. It isn't until college that this shift begins to take place; and the more free writing practice they've had in the younger grades, the easier it will be.

Dump the red pen. Giving back writing with red marks all over it, referred to as “negative teaching”, does little more than teach a student to hate grammar and the subject of English more generally, Neuleib says. She compares this with teaching a child to play the piano: “If we corrected someone every time they did something, they would never learn to play.” And fussing over the details isn't worth it in the long run, says Neuleib; it's more important to encourage kids to write as much as possible.

Humor helps it stick. When teachers and parents approach grammar as a set of rules to be followed, kids immediately start searching for the mute button. In Eats, Shoots & Leaves (Gotham Books: 2003) author Lynne Truss shows grammar sticklers and delinquents alike that using punctuation with a little imagination can be an art form. She encourages readers to see punctuation marks not as so many blurbs on a page, but as characters with their own sense of purpose. Truss describes the comma as an overworked sheepdog. “The comma has so many jobs as a 'separator',” she says, “that it tears about on the hillside of language, endlessly organising words into sensible groups and making them stay put: sorting and dividing; circling and herding; and of course darting off with a peremptory “woof” to round up any wayward subordinate clause that makes a futile bolt for semantic freedom. Commas, if you don't whistle at them to calm down, are unstoppably enthusiastic at this job.” The point is really to switch your mental point of view about punctuation—from an oppressive force of evil to a cast of colorful characters who are there to help you communicate more effectively... whenever you're ready to meet them.

So, don't rush your child into wielding the semi-colon quite yet. Instead, focus on giving her a solid literary foundation and a love of the language. Who knows, she might even become a punctuation stickler, and wind up correcting you a few years down the road.

Next Article: Introducing the Five-Paragraph Essay
We enable strictly necessary cookies to give you the best possible experience on Education.com.Cookie policy