Road to College: The End of Senior Year 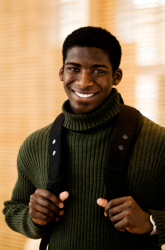 It’s never easy to go against the grain, especially when that grain appears to involve nothing but relaxation, recreation, and really easy coursework. But second semester senior year, a time when students nation-wide infamously contract “senioritis” or fall into “senior slump,” holds the potential for some of the most important and valuable college preparation.

Certainly, most college counselors agree that it's okay to lighten a student’s course load slightly, but there is no reason a student’s attitude towards those courses should change. Laissez-faire attitudes tend to beget lower grades, of course, but that’s not the only reason to avoid them. Educational consultant Steve Atanoff of Denver, Colorado says it's important to maintain the grades that got you into college. “What one does [in the second semester] says a lot about how one will do in college, because being organized, practicing good time management – these skills are central to success in one’s first year of college,” he says.

Also of critical importance to a student’s success in college: emotional preparation. Now that all of the applications are done, and beneath the façade of rest and relaxation, second semester seniors begin to face the reality of their impending departure. “All those thoughts about leaving home, leaving friends, adjusting to a small room and a new environment can be overwhelming,” says Atanoff. This is especially true when those thoughts are left undiscussed. “Play out different scenarios,” Atanoff recommends. “Think through what coping mechanisms are going to be helpful in negotiating that first year.”

This is not to say that second semester must be all about academic and emotional work, by any means. After all, between Prom, Grad Night and other annual traditions, there are many important opportunities for fun and milestone-markers. But, as the time previously spent on SAT prep work and college applications opens up, consider old back-burner alternatives. “Think about growing and developing by taking a course in something you’ve always wanted to, but never had the time,” Atanoff recommends, mentioning public speaking or photography. “It’s not too late to enrich one’s high school experience.”

That enrichment can also be found in familiar and on-going extracurriculars, where seniors often have the opportunity to take on leadership roles, plan end-of-year events, or mentor underclassmen who will soon fill their shoes. “Continue to be involved as before,” recommends educational consultant Chris Covert of Carefree, Arizona. Indeed, this commitment will “guard against the tendency to overly relax,” according to Covert, but it can also foster a growing sense of adulthood and independence – two more skills worth carrying in one’s college-bound suitcase.

Finally, alongside senioritis, second semester seniors are often plagued by an experience of self-definition based on college acceptance. Everyone from friends and family members to neighbors and random strangers seems interested in where you’re going. Although it’s important to be excited about the destination that lies ahead, it’s also important to remember that, as Miami, Florida-based educational consultant David Altshuler says, “after your first job, no one will ask you where you went to school; who you are is so much more important than where you go.” Indeed, wherever you’re going, there is a life-changing experience ahead; take time to enjoy the final months of preparation before lift-off.

Next Article: IB or Not IB? Is International Baccalaureate Right for Your Child?
We enable strictly necessary cookies to give you the best possible experience on Education.com.Cookie policy