The Real Deal on Roughhousing 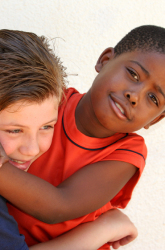 From their first gentle touching games like “This Little Piggy” to rambunctious wrestling, children love physical contact. But as any parent will tell you, sometimes the horseplay seems like it's over the line. Parents of boys, especially, know the scenario: it starts out with a choke hold, they laugh uproariously, throw each other to the ground, wrestle, and five minutes later someone is crying. Why do kids have to play so rough?

Physically, says Kranowitz, children develop gross motor skills when they engage in rough play, and that's a must for developing fine motor skills such as writing. “Most kids today are much too sedentary, and, as a result, have huge problems with handwriting," she says.

Neurologically, rough play nourishes a child’s sensory system through feelings of “deep pressure to their muscles, joints and skin. One cannot learn these skills by watching TV or reading a book,” Kranowitz says.

Roughhousing also has social benefits, according to Kranowitz.  “Children learn about give and take, cause and effect, taking turns, and playing by the rules," she says.

But should parents be concerned about their child’s rough play? “Yes and no,” says educational consultant and therapist Ingun Schneider. “Some children these days seem to have very little sense of how strong or hurtful they can be. Parents need to set rules to suit their particular child,” Schneider says.

These rules should include:

Parents shouldn't be worried about “encouraging” this type of behavior. In fact, they can be instrumental in maximizing the benefits of rough play. Ingun Schneider suggests that:

Rough and tumble play helps children learn about their bodies and the world, and prepares them for learning. So, parents, grab your whistle, lay down some cushions and some rules, and let ‘em at it!

Next Article: The Best Board Games for Every Age
We enable strictly necessary cookies to give you the best possible experience on Education.com.Cookie policy