The Best Board Games for Preschoolers 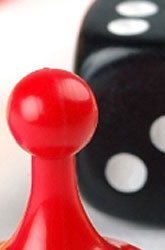 Looking for a boredom buster? Wait! Before you turn on the TV, think about another box ... the board game!

You may not realize it, but we are knee-deep in the middle of a nationwide endeavor. From September 1st through December 31st, families from coast to coast are doing their part in the 7th annual Million Minute Family Challenge. It's a game-palooza, a national effort to bring family, neighbors, and friends together through the power of board games. The goal? One million minutes of game playing, my friend.

Whether it's a midnight round of Monopoly or Saturday Scrabble, you can add your minutes to the total at www.millionminute.com. Even the littlest family members can help!

For those of you who just can't bear to stare another minute at that well-worn copy of Chutes and Ladders or that box of Candyland missing half its pieces, we've got a few games up our sleeve that may have slipped past your radar. Here are five absolutely fantastic games for preschoolers that may not be in your closet yet: 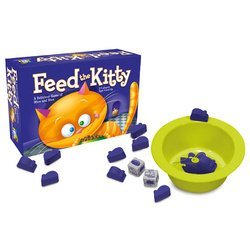 Feed the Kitty (2-5 players, ages 4+) It's lunchtime for kitty. And each of the players is trying to protect their rodents from ending up in her little green bowl. This is a fast-paced dice game that requires no reading. Plus, with playing time a mere 15 minutes, it's the perfect length for shorter attention spans, yet still helps reinforce the importance of patience. The game comes with two custom dice, 20 wooden mice, and a plastic bowl (meow!) Roll an arrow and pass one mouse to the player at your left. Roll a snoring cat and count yourself lucky. But roll a picture of a bowl and your mouse is about to get munched-- it's lunch time for kitty! Whoever manages to hold on to the last mice, wins. This game is major fun for preschoolers and kinders and gives them practice with light counting, following instructions, and taking turns. They'll love the fact that "whoever has the shortest pinkie gets to go first". * * * (Gamewright, $11.99) 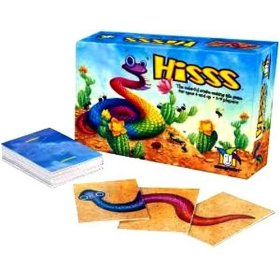 Hisss (2-5 players, ages 4+) It sounds simple enough: build the most snakes from a stack of severed snake cards (some heads, some tails, and some middles). Here's how it works: the whole pile of tiles are fanned out on the floor and players take turns picking a card and trying to match it to a piece with the same color. If there's no match available, they can start a new snake and the player with the most snakes in the snake pit when the game ends, wins.  While the game doesn't seem tremendously educational on the surface, it does get kids practicing pattern recognition, color matching, thinking ahead... even logic. Plus, with the typical snake slithering far across the floor before completion, they'll even get in a little exercise as they stretch out, trying to make a match. * * (Gamewright, $9.99) 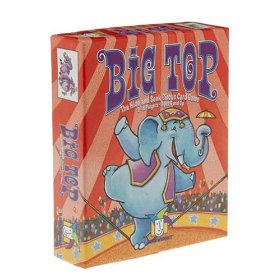 Big Top (2-8 players, ages 4+) A nice travel game for the younger set, Big Top gets pre-readers using their noodles to discern what's missing in a stack of circus cards. There are five possible colors and five possible animals that might make an appearance and children need to look and see which color and which animal aren't there, then find the card that combines both... before their opponent! The game helps hone critical thinking and recognition skills that will help with letter recognition and reading, later on. * * * (Gamewright, $9.95)

Step to It!  (2-8 players, ages 3 +) This game is the best of the bunch, combining fun and learning in an irresistible package 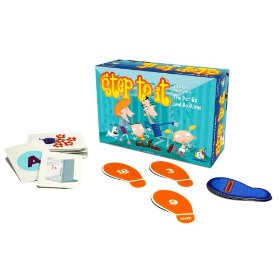 . Players lay out a set of cards with pictures on them (for younger learners) or letters (for those on the road to reading), then a set of footprint cards-- each with a number written on it. One player picks a footprint card and reads out the number, for example, "Seven!". Then the other player picks from the deck to determine a destination. In the easier version, this might be a card with a picture of a couch or window. In the more advanced version, it's a letter, like "D", and kids need to come up with an object that starts with that letter, for example, "Door". To win the round, the player must hop, jump, or step to the object in the number of steps dictated by the footprint card.  Can your child make it to the door in exactly seven hops?  You'll see.  And you'll see her practicing numbers, letters, logic, and estimation in the process. * * * * * (Gamewright, $11.95) 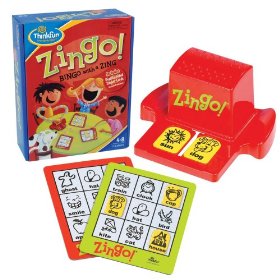 Zingo Bingo, with a twist-- a super fun contraption that makes the card sorting more fun. There's nothing revolutionary about this game. But it's a nice version of a preschool and kindergarten staple. Each board has a set of pictures with the words spelled out below. Kids need to collect enough matching tiles to fill their board first. The game teaches letter recognition and  matching, key precursors to reading. * * *  (Think Fun, $14.99)